Kensington gardens and Hyde Park merge into one at the east end. Originally Kensington gardens were the grounds of Kensington Palace and it was not until 1841 that they became a public park. This is a charmed garden for kids and a relief for parents. There's a bronze replica of Peter Pan created by Sir George Frampton in 1912. The little boy who never grew up, has never grown out of fashion and children today still delight in the little boy playing his pipe to the animals and fairies. Another favourite is the Elfin Oak. Encased by iron bars for its own protection, this treetrunk is the work of Ivor Innes who carved little woodland figures and scenes into the wood. The next monument you'll see is George frederick's Watt's symbol of Physical Energy portrayed in a monument of a horse and rider. Near Lancaster Gate is a surprising tribute to the dead, a cemetery for dog's began by the Duke of Cambridge in 1880.

Kensington Palace
Kensington Palace itself was built by Sir Christopher Wren. The palace is a historic building which saw Victoria woken in the middle of the night to be told that with the death of her uncle William IV she was now the Queen of England. It was the home of Princess Di who resided here between 1981 and her death in 1997. Visitors to the palace tour ornate state rooms and view a selection of court fashion since 1760 (including some garments which formerly belonged to the Princess of Wales). Within Kensington Gardens, the Princess's playground built around a Peter Pan theme is a favourite with kids. 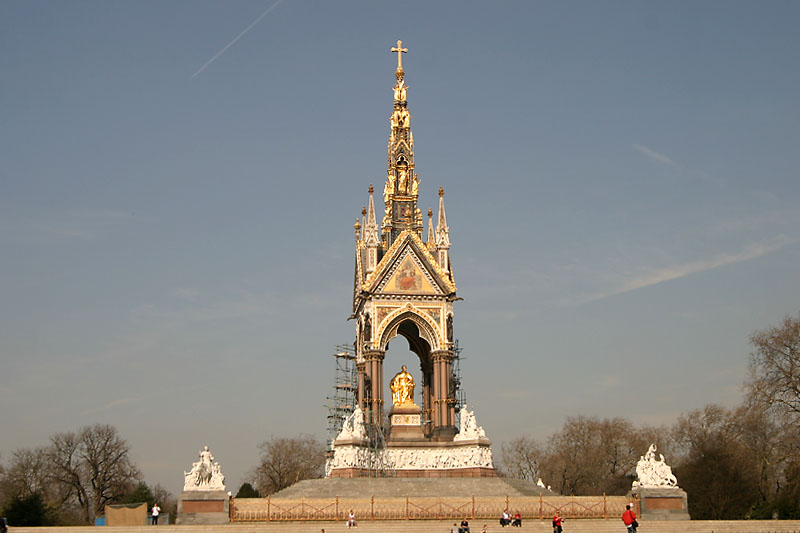 In the square, would-be theatre goers queue at the half-price ticket booth while touts endeavour to entice them away. Street entertainers bring the sq ....