"dawn clouds to the east and glorious sunsets to the west...the loveliest skies in Europe"
J.M.W. Turner

As the first seaside resort in the country, Margate has drawn visitors ever since the 1730s. The 700 year old harbour had been extensively used by the sailing hoys which regularly plied their trade from London. However, a new cargo inundated the town in the 18th century when boatloads of holiday makers came to try out Benjamin Beale's wonderful, new innovation. A local inventor, he patented a bathing machine which allowed for therapeutic and modest bathing. Little, wooden huts were pulled into the sea and the bather could then descend into the water covered by a canvas. The introduction in 1814 of 'Steam Yachts' caused rapid expansion which continued throughout the 19th century. The wooden jetty was constructed in 1824 and the famous iron jetty in 1855 which allowed visitors to disembark from the visiting steam packs. Margate's fate was sealed and before the advent of overseas tourism, Margate remained a popular and affordable destination for Londoners.

Margate now presents a pleasant if anachronistic amusement for a weekend The waterfront is lined with all the typical, British seaside amusements; tacky amusement arcades, Wimpy, gelaterias, cafe's and restaurants. Of course there's no shortage of fish 'n' chips and if you're feeling game you can also sample some local fresh jellied eels from one of the stalls by the beach. This is a place the kids will love. There's a large, kids pool and a colourful playground all on the beautiful, golden beach. If you get tired of the beach, you can divert yourself with a stroll around the Old Town and Market Place. 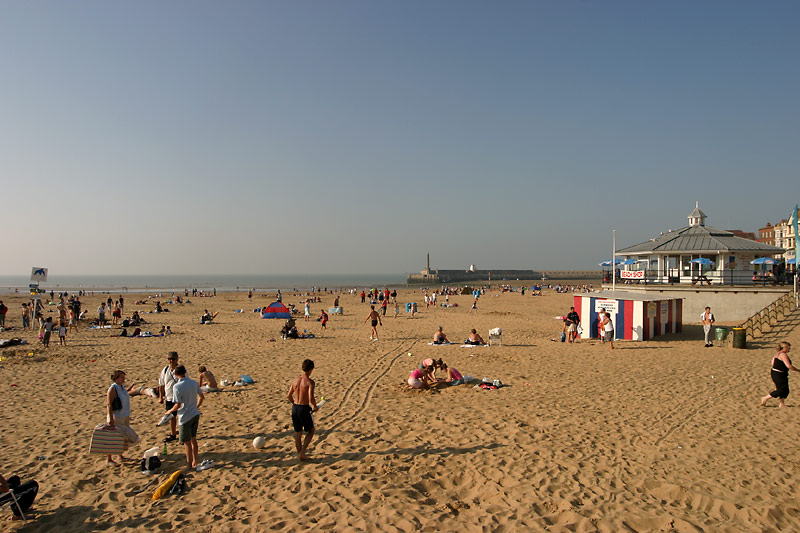