"The world is a great book; he who never stirs from home, reads only a page."
St. Augustine

The largest of the seaside towns on the Isle of Thanet, Ramsgate immediately appeals to the eye. The seafront is lined by stately, red-brick Victorian and Georgian buildings looking over the harbour. The only Royal Harbour in the country, Ramsgate was favoured by King George IV when he received a grand welcome here in 1821 on his visit with the Royal Yacht Squadron. A stroll along the marina with its variety of working, historic and pleasure vessels is a pleasure in itself. Further along the promenade, you'll come to Ramsgate's famous rich golden sands with huge, bouncy, play castles for the kids, deckchairs, icecream and all the other trappings of a typical British seaside resort. One major port of call for tourists is the Viking Ship, Hugin which made an epic journey to Kent in 1949. Other visitors come here to visit the Sandwich & Pegwell Bay National Nature Reserve. Many of those who come here are pilgrims who come to the see the site which marks the beginning of Christianity in England in 597. This is the St Augustine Cross which marks the spot where the young, mark disembarked and began his important mission in England. By Christmas of the same year, King Ethelbert, King of Kent and 10,000 of his subject had been baptised into the Roman Catholic Church.

Ramsgate Harbour
With origins dating to the time when the Wantsum Chanel separated the Isle of Thanet from the rest of Britain, Ramsgate's first harbour was built by fisherman, who steadily improved the protection given by natural features. By the early 18th century, small merchantmen could find shelter here. Many lives and ships were lost on the Goodwin Sands in ferocious storms in 1703 and 1748 so parliament ordered a 'harbour of refuge' to be built. Work commenced in 1750 supervised by a succession of famous engineers, including John Smeaton. The harbour has witnessed some momentous events, troops embarking for the Napoleonic Wars, visits by royalty George IV granted the harbour its unique Royal status, the miracle of the Dunkirk little ships and the world's first international hovercraft service. While the Georgian harbour remains virtually unchanged, a new ferry port has been added and floating marinas encourage visits from a fascination range of vessels. 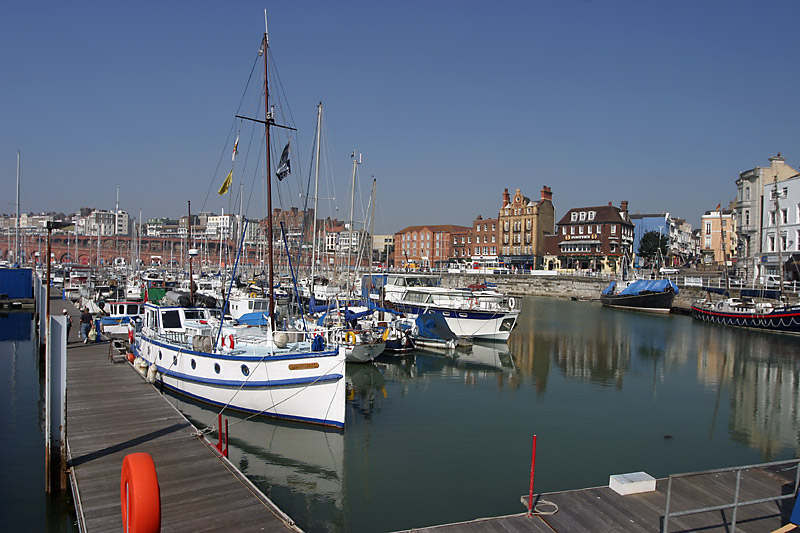