"And specially, from every shire's end
Of Engleland, to Canterbury they wend,
The holy blissful Martyr for to seek,
That them hath holpen, when that they were sick."
Geoffrey Chaucer

Enclosed on three sides by medieval city walls, Canterbury has been a tourist magnet for centuries. The religious capital of Britain, Canterbury stood in the central stage of an often turbulent history. The centuries saw repeated sacking by the Danes, the Dissolution of the Monasteries and targeting by the Baedeker Raids, the infamous Nazi plan to obliterate Britain's historic sites. Despite the turbulence, Canterbury survived and is now home to one of Britain's Unesco World Heritage Sites. The awe-inspiring, Canterbury Cathedral, ruins of St. Augustine's Abbey and the ancient St. Martin's Church are all protected heritage areas. Murderous events at Canterbury left another important legacy, The Canterbury Tales , (the bane of literature students worldwide). Chaucer's classic re-enacted the times of the pilgrims and their journey to the shrine of the assassinated St. Thomas a Becket.
The drama began with the arrival of Augustine, a young monk sent by Pope Gregory the Great on a mission to re-convert England to Christianity. On his arrival in Kent in A.D. 597, he was granted a church at Canterbury by King Ethelbert whose wife was already a Christian. Within a year, the king and over ten thousand of his followers were baptised. St. Augustine went on to build a cathedral with an attached monastery that would become a famous place of learning. However, it was the events of 1170 that forever marked Canterbury on the tourist map. Once on friendly terms, tension arose between King Henry II and the Archbishop of Canterbury, Thomas a Becket. The king called for the subjugation of the clergy to the "customs of the realm" and the abandonment of their direct ties with Rome. Thomas a Becket, on the other hand, insisted the Church be exempt from secular law and retain all authority over the clergy. Despite appeals and mandates to and from Rome, the two opposing sides remained obdurate and no compromise was found.

The threat of King Henry II's excommunication by Pope Alexander brought an apparent compromise between the two and after six years of voluntary exile Thomas a Becket returned to Canterbury. Although he would later deny the accusation, it is said that Henry ranted, "Will no one rid me of this troublesome priest?,". The ominous words were taken literally by four knights who took it upon themselves to carry out the king's wishes. It was not only the crime but the sacreligious choice of place which would horrify posterity. The atrocity was committed in the quire of the cathedral when Thomas a Becket was on his way to vespers with the monastic community. The horrific assassination caused an outrage amongst the religious community and pilgrims flocked to the shrine placed on the spot of the murder. Even in death, Becket found little peace from the British monarchy and the holy shrine was plundered and demolished during the reign of King Henry VIII. In front of his holy shrine, a writ was read denouncing Becket for 'treason, contumacy and rebellion'. As orders for all traces of the shrine to be removed were followed, 26 cartloads of jewels and gold were removed. On your visit to the cathedral you'll see a burning candle upon the floor marking the holy spot. 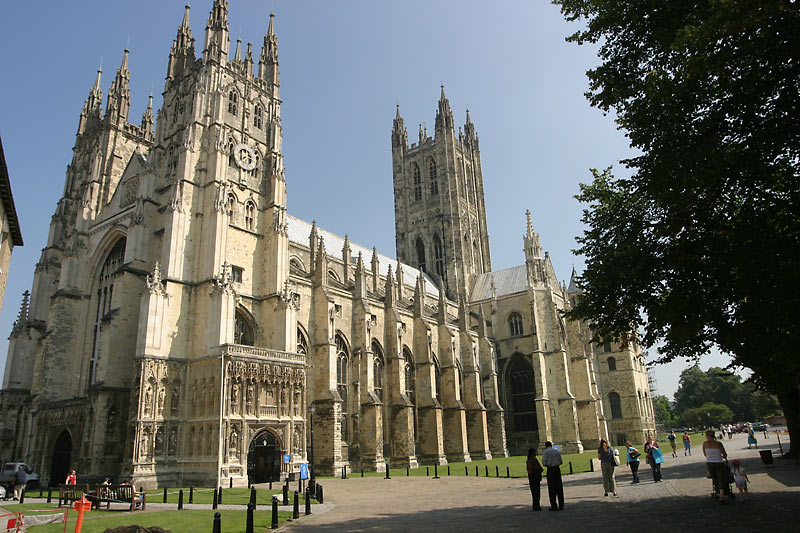