When the sea left this town, its charm remained. Guaranteed to please, Rye is an ancient, port town lined with half-timbered houses, cobbled streets and curious little shops. One of the original Cinque Ports, Rye was once a fort almost totally surrounded by the sea. However, the silting of the harbour in the 16th century resulted in the sea receding two miles from the town. Nevertheless, the harbour has seen a rebirth and fishing is still an important industry here. Indeed, the Rye Herring has been dubbed one of the seven, culinary wonders of Sussex!

The town's charm is evident on the cobbled, Mermaid Street. The Mermaid Inn was founded in the 11th century but rebuilt in 1420. This was part of the extensive rebuilding of the town which occurred after yet another French attack which burnt the town to the ground in 1377. The Mermaid Inn, is the largest medieval building and it was here, that the notorious, Hawkhursts met and drank with their loaded pistols upon the table. On one occasion, they unloaded a hoard from three cutters which required the services of 500 pack horses. The Hawkhurst Gang seemed to be able to get away with murder. Or so they thought. In the belief that a gang member had turned informer to a Customs Officer, they plied the two with alcohol and then beat them half to death. They then proceeded to accidentally bury one alive. The other was stabbed, thrown down a 30ft well shortly followed by some large stones to polish him off. Once deemed as benefactors, public opinion turned against the gang and the ring leader was executed for the murder. So famous was Mermaid Inn, that a similarly, old house which fronts it is simply called, 'The House Opposite'.

Mermaid Street is quite steep and you might want to take a longer but more gentle way up through the high street. From here turn into West Street, where you'll see the former home of Henry James which was partially blasted in WWII but has now been converted into a museum. Head down down the road and you'll find yourself in Church Square with the 12th century St. Mary's Church boasting the oldest, church turret clock in the country. Just round the corner is the Rye Castle Museum housed in the 13th century, Ypres Tower. From here you'll see canons which once pointed out to sea but now look onto some peaceful countryside.

You'll find yourself wanting to linger in this quaint town with its fantastic tea rooms, cosy restaurants and antique shops. The more energetic will prefer a trip to the Rye Harbour Nature Reserve which is home to Camber Castle and a large, variety of fauna and flora. 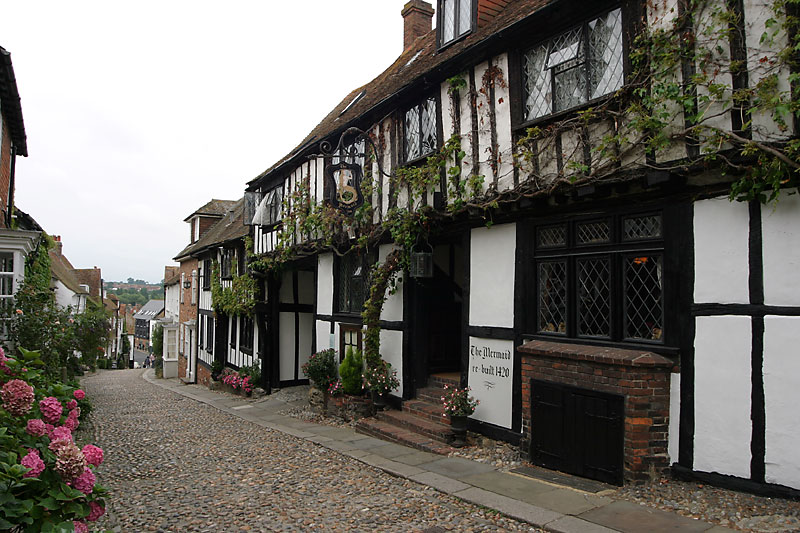