"Then they departed, and within five days' journey they came to Camelot, that is called in English, Winchester. And when Sir Lancelot was come among them, the King and all the knights made great joy of"
Sir Thomas Malory, Le Morte d'Arthur

Winchester, the ancient capital of England, lies in Hampshire County of which it is the administrative capital. Sometimes known as the legendary Camelot, this pretty, country market-town should be at the top of your list if you're interested in history and culture. Most visitors are attracted here by the magnificent Winchester Cathedral which is one of the most remarkable, extant examples of the Gothic Perpendicular style. To arrive here is to seemingly take a step back in time, it is well-preserved and has also retained some ancient traditions. The town has retained its reputation for its scholars and continues in its ancient tradition of providing alms and shelter for senior citizens.

A beautiful city, Winchester was one of the locations for the filming of the Da Vinci Code. Attractions abound. As well as the Winchester Cathedral, there's the magnificent Great Hall and its pride of joy, the Round Table. Cultural enthusiasts will delight in Wolvesey Palace, the Old Bishop's Palace and Winchester College, one of the oldest public schools in England. Your trip may also include paying your respects at the graves of some of England's greatest Kings and Queens, Bishops, Saints and literary giants such as Jane Austen. Alternatively, there's the Peninsula Barracks where you can fire a Baker Rifle or find out more about the history of various regiments of the British Army. If all that's not energetic enough for you, Winchester also lies on the route of some historic trails and you can walk in the ancient steps of pilgrims on routes that vary from a few hours or could take you all the way to France. Bon Voyage!

Short History of Winchester
The Iron Age saw two major centres of settlement at Winchester. St Catharine's Hill, a hill-fort, lies to the south of Winchester and Oram's Arbour which lies to the west of the River Itchen. Excavations have produced numerous remains of coinage(Gaulish/Ptolemaic) and regional pottery showing extensive economic links which would have stretched as far as the Continent by the Late Iron Age.

Winchester was amongst the first Roman settlements and evidence shows their presence here just seven years after the invasion in AD43. They named Winchester, Venta Belgarum meaning 'market place of the Belgae' and by the 1st century, it had been established as a civitas or walled town. The Romans improved the valley now known as Winchester by the use of drainage canals and built six roads emanating from the town which further established it as a centre.

Winchester started to grow in prominence and went on to become a Saxon settlement called 'Wintanceaster' the name from which Winchester is derived. 'Ceastar' in Old English would have referred to a Roman walled site of 'dark earth'. The name suggests an interconnection between the Romans and the Saxons which is further supported by findings of both types of graves dating to this period. By 519AD Winchester had become the capital of the ancient kingdom, Wessex but is was not until the arrival of a Christian missionary, Birinius in 635 AD that the West Saxons converted to Christianity. Old Minster was founded shortly after during the reign of Cewalh and so were laid the foundations for one of the England's greatest cathedrals.

Winchester was established as the capital of King Alfred's Kingdom in 827. The most loved and esteemed of all England's kings, King Alfred encouraged the revival of learning and monastic life. Alfred also created fortified centres of which Winchester, the largest was the capital. In so doing, King Alfred led the foundation for a single kingdom of England. His influence on Winchester was made clear in 1901 with the unveiling of the great statue of Hamo Thornycroft which looks down over Winchester city. Incidentally, legend has it that if a young maiden circles the statue three times, Alfred's sword will fall. King Alfred's son, Edward the Elder, enhanced the royal status of Winchester with the foundation of New Minster, a religious house and a burial ground for West Saxon Kings. Alfred was reinterred here along his wife Ealhswith and was thereby forever linked with the capital of Wessex.

After 900AD, the addition of Nunnaminster, a cloister for holy women and New Minster brought to Winchester a strong religious foundation. As the power of the church grew, Christendom underwent a Reformation in 950AD. In Winchester this made itself evident with the replacement of monks instead of clerks in Old and New Minster. This was a good investment, monks were more cost effective, more pleasing to God and would subsequently also get more cash from beneficiaries. Reforms also saw the recognition of St Swithun (albeit some 100 years after his death). A popular hero, legend has it that a short-sighted monk was strolling merrily along when he bumped into a farmer's wife. Swithun broke all the eggs she was to sell at the market but her dismay would soon turn to relief. Instead of chastising her for putting her all her eggs in the one basket, the kind bishop had simply made them whole again.

Swithun was renowned for his generosity and piety, his enthusiasm for building new churches and restoring old ones. He also gave himself a reputation for throwing banquets to which the rich were not invited. St. Swithun specifically requested to be buried outdoors so that the "sweet rain of heaven" would fall on his final resting place. When his remains were reinterred in Old Minster a new legend was born. Contemporary writers reported miracles preceding and following the move. Wulfstan Cantor, an eye-witness, reported that it rained throughout the ceremony. It seems that this is the event behind the saying which tells that rain on St. Swithun's Day, 15 July foretells rain for 40 days and nights after. "St Swithun's day if thou dost rain/For forty days it will remain/St Swithun's day if thou be fair/For forty days 'twill rain na mair."

For the next couple of hundred years, Winchester stood in equal importance to London. William the Conqueror received his coronation in both cities and confirmed Winchester's importance by his important commission of the local monks to prepare the Domesday Book. He also ordered the construction of a castle in the south-west corner of the walled city and rebuilt and enlarged the royal palace in front of the Old and New Minsters. In the run up to the civil war between Stephen and Matilda, Bishop Henry du Blois fortified both the Bishop's Palace at Wolvesey and the former royal palace by the cathedral, giving Winchester a total of three castles by 1141. Decline now started and a serious fire in 1141 further set the old capital en route to becoming a provincial town past its heyday.

Short History of the See of Winchester
During the 7th century, England was divided into a number of separate kingdoms. At this time Winchester was in Wessex, the tribal kingdom of the West Saxons. In 635, King Cynigils gave permission for Birinius, a missionary, to preach Christianity to his people. Birinius became the first Bishop of Wessex and established an episcopal centre at Dorchester upon Thames. This moved to Winchester in 662 with the building of the first cathedral church.

Winchester became the natural centre of an episcopal see which covered the whole of Wessex and for much of the time the West Country. This naturally reduced in size as new bishoprics were created but by the 12th century, it still covered Surrey, Hampshire and the Isle of Wight.

The bishop's extensive estates were administered from eight main locations including Farnham Castle and the palaces at Bishop's Waltham, Wolvesey and Southwark in London. Quite a lot is known about their estates as the information was recorded in the Pipe Rolls. These unique manuscripts are financial accounts and give a detailed picture of the main events on the bishop's estates. Wolvesey Palace acted as a centre for these estates and all their accounts were sent to Winchester. The bishop's palace at Wolvesey acted both as an administrative and economic centre. Originally it had a second courtyard which contained buildings associated with the economic activities on the bishop's estates, such as barns, stables and a large wool house. Several mills belonging to the bishop were also located nearby. 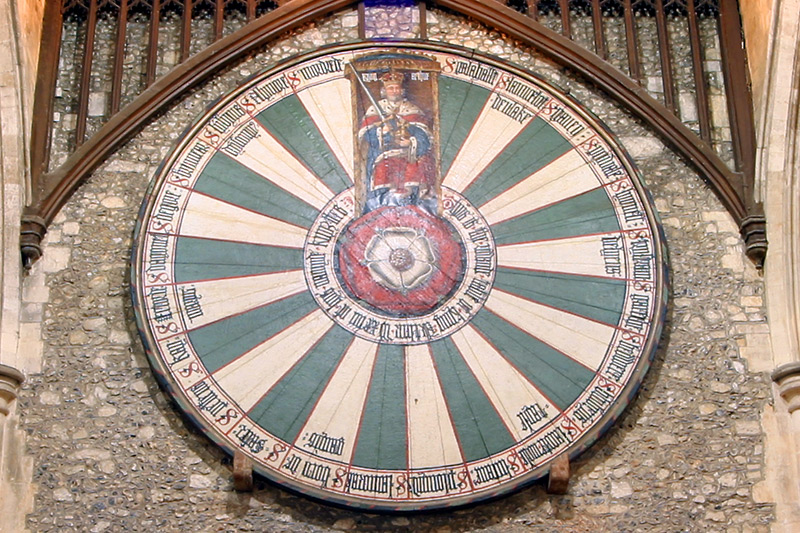