"They found a naked child upon the sands Of dark Tintagil by the Cornish sea; And that was Arthur; and they fostered him Till he by miracle was approven King:"
Tennyson, Idylls of the King

Site of legend, romance and history, Tintagel occupies a spectacular cliff location on the Cornish Coast. Though small and very touristy, Tintagel is charming and either the scenery, its history or its legendary status are sure to capture your imagination.

Tintagel is no mere tourist trend, it has been boldly inscribed upon the tourist map for centuries. Ever since the 12th century historian, George of Monmouth wrote Historia Regum Britanniae, or History of the Kings of Britain, generations of pilgrims have come to Tintagel in homage to the great legend of King Arthur. Most notable of these are Tennyson, Swinburne, Hardy and Turner who all produced marvellous works inspired by this outstanding location.

Monmouth cited Tintagel as the spot where 5th century King Arthur was conceived. Tintagel Castle could quite possibly have been the very spot. Not only has excavation proved the site was inhabited at the time but below Tintagel Castle on Tintagel Beach you'll also find Merlin's Cave " it all fits the legend. Unfortunately, Monmouth's work was written some 600 years after the events described and is therefore not considered to be a reliable historical source.

Whether you believe the legend or not, the remains of Tintagel Castle are worth visiting simply for the views. Tintagel Castle lies on the South West Coast Path and is most spectaculary approached along a footpath from Glebe Hill in the west. On the way, you'll pass remains of an old quarry and see its head office, a low building which now serves as youth hostel. The next attraction to be seen on the way is St. Materiana Church, a 12th century building with Saxon doors, windows and a five-legged font. Continuing along the path and its spectacular coastal scenery, you'll come to Tintagel Castle. The castle sits on an island joined only to the mainland by a finger of land. For centuries, the Altantic Sea has pounded its contours and massive buttressing has had to be erected to prevent the Great Hall from slipping to the fathoms below. At low tide, it's worth descending to Tintagel Beach (a good swimming spot) where you'll also be able to see Merlin's Cave.

Back in Tintagel itself you'll find another attraction that to many is at least at as wonderful, if not more so, than Tintagel Castle. On Tintagel's main road you'll find a wee manor house dating from the 14th century. The building, with its ramshakle roof and tiered chimney stacks, looks like something out of a kid's story book. It is known as the Old Post Office, after the service it provided to the community in the latter half of the19th century. Filled with period oak furniture, the building is a rare survivor of the once typical Cornish Longhouse. Other attractions in Tintagel include the Tintagel Toy Museum and King Arthur's Great Halls, an entire building dedicated to the great legend with over 70 stained glass windows. 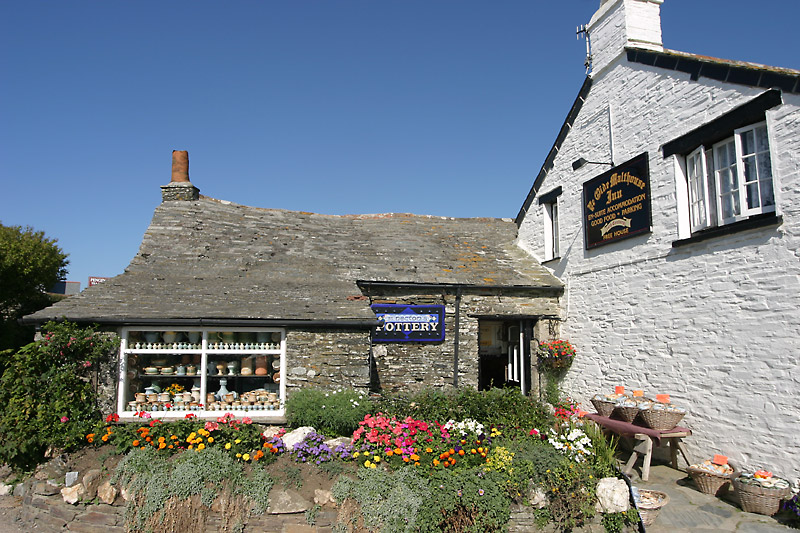