Lying a couple of miles from Alloa, Clackmannan is dominated by Clackmannan Tower, once owned by Robert the Bruce. The town has given its name to Scotland's smallest county, Clackmannanshire. Granted a burgh charter in 1550, Clackmannan once served as a small port on the Black Devon but when this tributary of the River Forth dried up, business moved further down the Forth to the then thriving port of Alloa. At Clackmannan's centre, you'll see a belfry which is all that is left of the old Tolbooth. A purpose built prison, it was constructed by Clackmannan's local sheriff, William Menteith who disliked the custom of housing felons under his own roof. Next to the Tolbooth, is the 16th century, Mercat Cross which bears the arms of the Bruce Family. It lies by the Mannau Stone, an ancient rock which has sprouted two folk tales describing the naming of Clackmannan. It is said that on St Serf's arrival in Clackmannan he found locals worshipping the sea god, Mannau, around the stone. Translated, "clach mannau" means the stone of Mannau hence the Mannau Stone. Another more popular version ascribes the naming of the town to a slight forgetfulness on the part of Robert the Bruce. The story describes how Scotland's great hero stopped for a rest by the Mannau stone. Continuing along his way, he later realised he had left his glove or "mannan" on the stone or "clach" and ordered a servant to go and fetch it.

If you stop by Clackmannan's Parish Church, you'll see a beautiful Coronation Window which was the congregation's gift to the church in commemoration of Elizabeth II's coronation in 1953. Dating to 1815, the church is believed to be sited on St. Serf's original church founded in Clackmannan in the 6th century.

Visible for miles away, Clackmannan Tower was built in the 14th century. Situated upon a former royal hunting lodge belonging to David I, the structure was extended and enlarged in the 15th and 16th centuries. However, the mansion which grew up around Clackmannan Tower had to be demolished in 1791 due to the subsidence of the land. Once the property of Robert the Bruce, Clackmannan Tower remained in the Bruce Family until as late as the end of the 18th century. It was then occupied by Catherine Bruce who earned a reputation for her 'hospitality and urbanity' and a tendency for conferring knighthoods upon her favourites. Robert Burns was one of these and on a visit to Clackmannan in 1787, he found himself taking part in an ancient ritual conducted with Robert the Bruce's two-handed sword. Clackmannan Tower is currently undergoing restoration under the care of Historic Scotland and may only be viewed from the exterior. 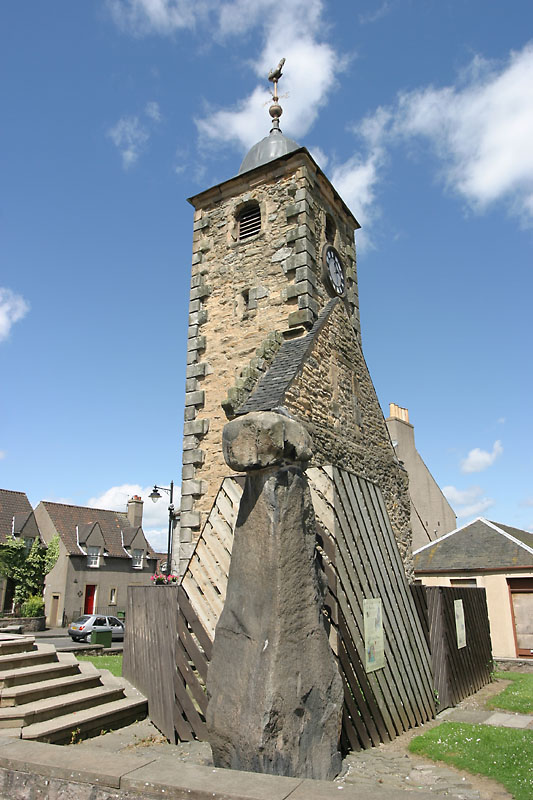