"In the town of Culross, most of the houses are shabby and all its streets are in disrepair. It formerly carried on a great trade in coal and salt which is now annihilated."
Wilson's Imperial Gazetteer of Scotland, 1856.

Situated on the Forth, the Culross (say 'cooroos') is arguably the most picturesque historic town in Scotland. Its cobbled streets are lined with wee yellow houses topped by slanting red pantiled roofs which all contribute to giving you an illusion that you have stepped back two or three hundred years in time.

Culross owes its present charm to a drastic decline in fortune in the 19th century when a lack of funds and development left Culross in serious decline until it was rescued by the National Trust in the 1930's. Granted a royal charter in 1592, Culross flourished with its port and mines in the 16th and 17th centuries but when a storm destroyed the mine and the pier in 1625, its days as a commercial centre were over. Unable to recover, Culross was fortunately preserved as a rare relic of different age.

The first miners of those 'black diamonds' at Culross were the Cistercian monks of Culross Abbey However, the industry really took off with the efforts of Sir George Bruce in the late 16th century. A descendant of Robert the Bruce, Sir George revolutionised the industry constructing the first coal mine to extend beneath the sea (now common practice). So important did the trade become that the standard measure for weighing coal was known throughout the land as the Culross Chalder. Sir George went on to build the grandest home in Culross, Culross Palace where he once lived with his wife and eight children. You can see their effigies in the mausoleum at Culross Abbey. Culross Palace has now been refurbished with period furniture. Along with splendid kitchen gardens, you'll see its original painted ceilings and wood panelling.

Mining produced an offshoot industry, salt panning which became one of the major employers at Culross with some 50 salt-pans strewn along the coast. Coal was used to heat the sea water and the salt produced, along with the best quality coal was easily exported from the port. By this time another 14th century Culross industry had also been refined to an art by Culross blacksmiths. It was here that the iron girdle was invented reputedly for Robert the Bruce's troops in the 14th century for the cooking of that Scottish speciality, oat cakes.

As you wander through Culross, you'll see the Mercat Cross once the centre of life in town where trading was conducted and proclamations were read out. The shaft was replaced in 1902 but the base dates to 1588. Looking down at the cobbled road here, you'll see the 'crown o' the causie' a raised part of the road reserved purely for the wealthy. By the Mercat Cross lies The Study (1610), once used by Bishop Leighton from Dunblane on his visits to Culross. Lying just off the 'Stinking Wynd?, Leighton's study room was high above the rancid smells in the Outlook Tower from where you'll get great views over the Forth. Another attraction in Culross is the Town House. Built in 1626 and used by the government of Culross, the building also served as a prison with debtors held on the ground floor and witches in the attic. Up a steep hill called the Tanhouse Brae lie the ruins of Culross Abbey. Founded in the 13th century, Culross Abbey fell into disrepair in the 16th century when the cloister was abandoned. The church was restored in 1603. 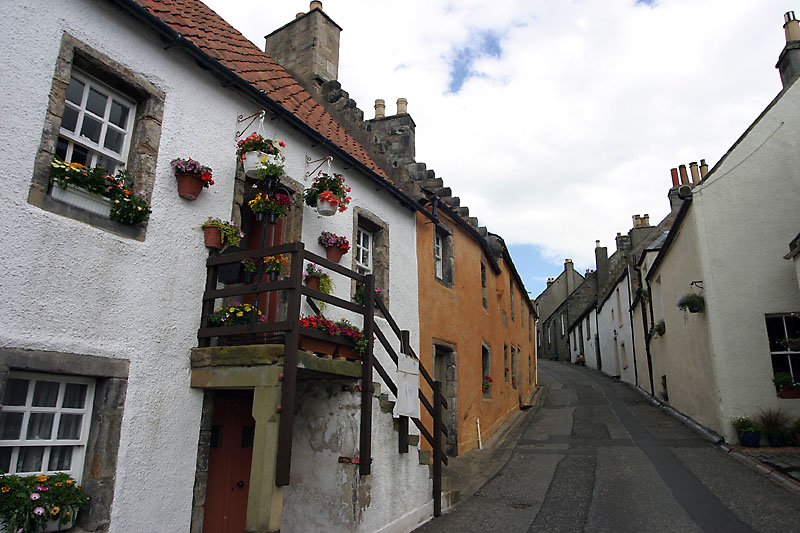