St Andrews has always enjoyed a healthy trade in visitors. After St Andrew's relics were brought here for safe keeping in the 8th century, pilgrims came to pay their respects in such numbers that the village was not only named after him but grew to become the ecclesiastical capital of Scotland. That all came to an abrupt end with the turbulence of the Reformation but St Andrews would soon draw pilgrims of another kind. Nowadays, a large percentage of visitors to St Andrews come to pay their respects to the home of golf and play a round in the golf capital of the world.
The first record of golf in Scotland dates to 1457 when the game was made illegal. It seems golf had already grown so popular that King James II worried his subjects would neglect the medieval arts of archery and swordsmanship and would become unable to defend their country! Ban or no ban, golf (or a crude form thereof) was still popular and in 1552, the citizens of St Andrews were officially given the right to play golf on the links. Both St Andrew and golf never looked back. In 1754 annual competitions were started at St Andrews by a club that would come to be known as the Royal and Ancient Golf Club. Now the recognised governing body for golf rules in most countries, its clubhouse overlooks the Old Course. Ancient in origin, the club is also ancient in tradition and to this day, women are only allowed inside on St Andrew's feast day. Beyond the 7 golf courses available, St Andrews also boasts another attraction for golfers, the award-winning British Golf Museum.

St Andrews itself has seen no drastic changes in form since the Middle Ages. Its street plan is medieval with the most important roads converging on St Andrews Cathedral. In this area, visitors to St Andrews without the slightest inclination or interest in golf, will find a wealth of culture and attractions. Overlooking the harbour, St Andrews Cathedral was founded in the 11th century on the site of an earlier church. Finally consecrated in 1318 by Robert the Bruce, St Andrews Cathedral received droves of pilgrims but all that remains today of the largest ecclesiastical building in Scotland are the ruins of its former glory. Nevertheless, visitors can still climb to the top of St. Rule's Tower. Dedicated to the saint who brought St Andrew's relics to Scotland, the Romanesque tower is worth the steep, winding climb up for the spectacular panorama of St Andrews harbour, town and countryside from the top. Inside St Andrews Cathedral museum, you'll see a collection of early sculptured stones including a rare 8th century Pictish sarcophagus.

A short walk from St Andrews Cathedral is the former home of the bishops of St Andrews, St Andrews Castle. Constructed in the 12th century, St Andrews Castle was a religious stronghold that would experience at first hand the religious turbulence of the 16th century. Its walls have witnessed murders and sieges, evidence of which you'll see in the fascinating mines and countermines dug under the castle. Also of note in St Andrews Castle is the gruesome bottle dungeon, a small pit hewn out of solid rock from which only death could provide relief.

St Andrews is famous not only for its castle, golf and cathedral but also for as a centre for learning. St Andrews also boasts St Andrews University, the oldest institution of its kind in Scotland. Founded in 1410, many of the original buildings have been destroyed but you can visit the quads of St Salvator's (1450) and St Mary's (1537) where you'll be able to see a thorn tree planted by Mary, Queen of Scots.

As well as admitting the first female student in Britain, St Andrews University created the first marine laboratory in the world. This connection to the sea is now celebrated at St Andrews Aquarium where you'll see wonders of the underwater world such as seahorses, piranhas, catfish, lobsters and seals. Other attractions worth seeing in St Andrews include West Port, the only surviving original gate into St Andrews on South Street. On North Street, is the charming St Andrews Preservation Trust Museum and Garden housed in a 16th century building. Gardeners and horticulturists will love St Andrews Botanic Garden where exotic plants include cacti and specimens well over 100 years old. 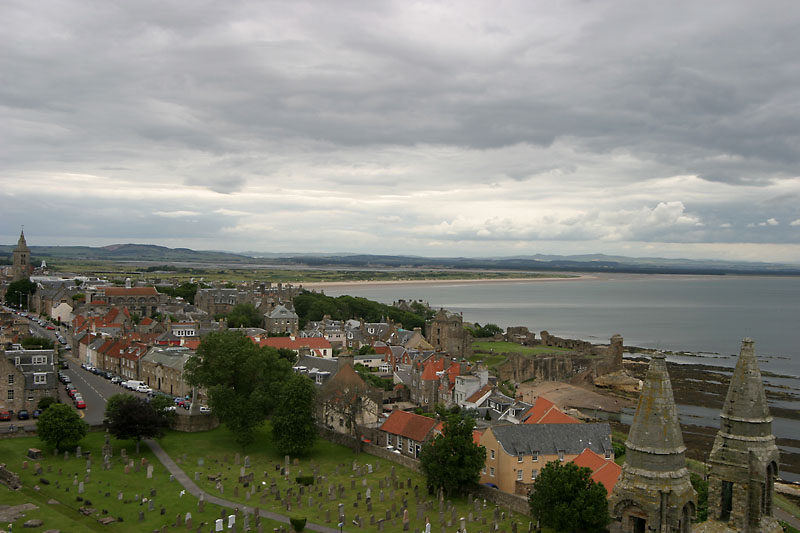 Lying just off the main road between Aberdeen and Dundee, Brechin was once at the centre of the Pictish kingdom. Brechin is now known for attractions ....