"Many of God's Children were imprisoned here."
John Knox

The remains of St Andrews Castle lie on a headland overlooking the coast. Protected by the sea on all but one side, St Andrews Castle was a strong fortification intended to protect the interests of the church. Turbulent times lay ahead from the date of its construction in the 12th century and the ruins which now lie here are a testament and a tribute to the Wars of Independence and the struggle between Catholic and Protestants in 16th century Scotland.

The first castle at St Andrews was built as a stronghold and palace for the bishops of St Andrews Cathedral. Strange as this may seem, this was a time when kings ruled by divine right and the church complemented the state governing body. Indeed it was the Archbishop of St Andrews who crowned Robert the Bruce King of Scotland at Scone in 1306.

In the Wars of Independence, St Andrews Castle was an important stronghold which changed hands four times in the changing tides of the wars. The Scots eventually recaptured St Andrews Castle from the English in the 1330's and proceeded to render it into a useless stronghold. Subsequently, very little remains of the first St Andrews Castle and the ruins which you'll see here date from the rebuilding of the castle in the 14th century and later.

By the 16th century, warfare itself had changed and St Andrews Castle saw enhanced fortifications in the form of two circular artillery towers constructed by Archbishop James Beaton to defend an attack from the front of St Andrews Castle. They were soon to be put to use.

This was a time was fraught with tension between Protestants and Catholics. Beaton's successor as Archibishop of St Andrews was his nephew, David Beaton. Already hated by the Protestants, Beaton did nothing to improve his popularity when he had Protestant reformer, George Wishart burnt at the stake in front of St Andrews Castle in 1546. Just two months later, Protestants lairds captured St Andrews Castle by gaining access disguised as masons. They killed the guards and murdered the archbishop in his bed. His naked body was then hung from the walls of St Andrews Castle.

A siege on St Andrews Castle to recapture it from the Protestants was subsequently ordered by the Earl of Arran, Regent of Scotland. However, as his own son was within St Andrews Castle, the initial attacks were weak. Five months later, work began on a mine or tunnel cut through solid rock beneath the gatetower in an attempt to collapse the castle walls. To render this work useless, those garrisoned within St Andrews Castle constructed a countermine. Guided solely by the sound of the miners, three false starts at the countermine were made but eventually the countermine intercepted that of the outside attackers.

St Andrews Castle finally fell in November 1547 following a massive artillery bombardment conducted by a French fleet with additional attacks from the Cathedral Priory and St Leonard's College. All inside were taken prisoner including John Knox, who had joined the Protestants within St Andrews Castle nine months earlier during an armistice. 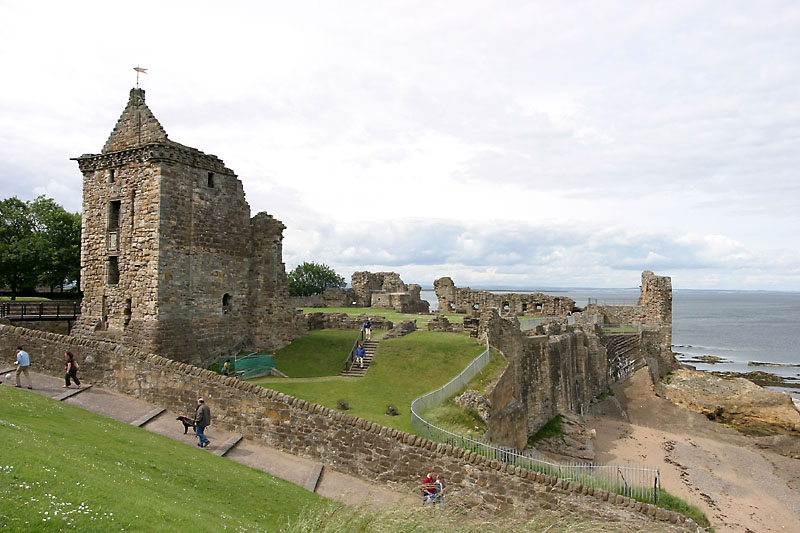