Situated a dozen miles from Perth and an almost equal distance from Pitlochry, Dunkeld was the first important ecclesiastical centre in Scotland. Best known for Dunkeld Cathedral, Dunkeld consists predominantly of charming 18th century architecture which will give you the impression that you have stepped back in time.

A seemingly tranquil place, Dunkeld has seen its fair share of Scotland's turbulent history. Following the destruction of Dunkeld Cathedral with the Reformation, the town of Dunkeld was actually turned into a battlefield in 1689. Following the parliamentarian removal of the Catholic Stuarts claim to the throne of England a year before, supporters of King James II known as the Jacobites rebelled throughout Scotland. However, the Battle of Dunkeld was unusually fought in the town itself. The Jacobites lost the battle and Dunkeld was left a total ruins.

Before the Battle of Dunkeld, the Dunkeld community was centred around Dunkeld Cathedral. However, as the Duke of Atholl preferred his new view of Dunkeld Cathedral, he ordered that the replacement buildings be built on the east side of the cathedral. Strolling through these 18th century streets with its whitewashed buildings is a thoroughly enjoyable way to see Dunkeld. Keep a look out for the Ell Shop, a National Trust building named after the ancient trading measurement the 'ell' (17 inches). The Ell Shop lies in a square familiarly known as the Cross. The cross was removed by the Duke of Atholl who replaced it with the fountain you'll see here on your visit. Behind the fountain is the very helpful Dunkeld Tourist Information Centre. 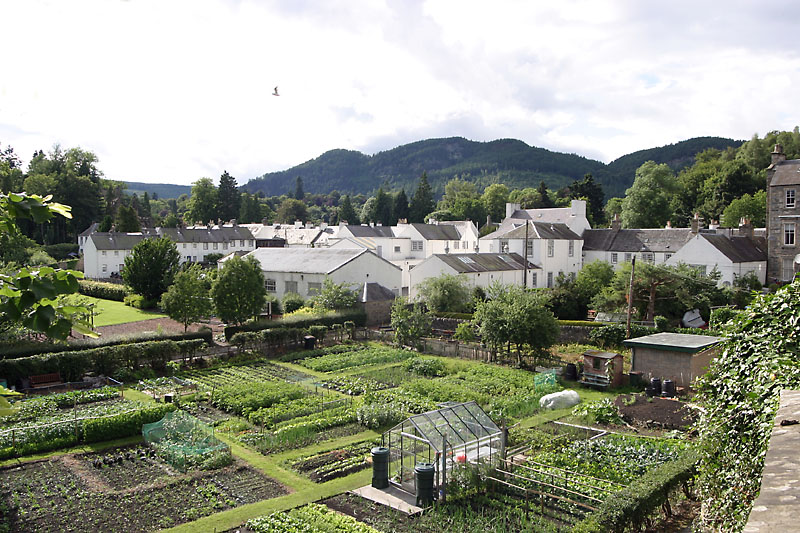