Childhood home of the late Queen Mother, Glamis Castle with it turrets, spires and towers looks like something straight out of a fairytale. Surrounded by stories and myths of gruesome happenings, Glamis Castle is said to be the most haunted in Scotland.

Glamis Castle first rose to notorious fame with Shakespeare's Macbeth. In the tragedy, Macbeth murders King Duncan in his bed. While it is possible Shakespeare did visit Glamis, the play is a slave to drama and from a purely historical perspective is highly flawed. In reality, Macbeth killed Duncan in battle near Elgin long before Glamis Castle was ever built. However, Glamis Castle has paid tribute to the tale by naming one of the oldest rooms within Duncan's Hall.

The Glamis lands were given by Robert II to Sir John Lyon in 1372. He married Robert II's daughter 4 years later and ever since Glamis has been intimately connected to royalty. Glamis Castle has never left the hands of the Lyon family, who earned themselves the title of Earls of Strathmore and Kinghorne in the 17th century.

The first Glamis Castle was a 14th century keep. However, over the centuries, Glamis Castle evolved and owes its present appearance to the 17th and 18th centuries when extensive restoration took place. Nevertheless, at the centre of Glamis Castle, you can still see the original tower house. Your tour will also take you to the Drawing Room with a little en suite room where gentlemen once adjourned to powder their wigs. In the Dining Room, you'll see portraits of the family as well as the Earl of Strathmore coat of arms on the fireplace mantle. The Royal Apartments consist of the Queen Mother's Sitting Room, Bedroom and the King's bedroom. These elegant rooms were arranged by the Countess Strathmore when her daughter Lady Elizabeth Bowes Lyon married Prince Albert in 1923. Here you'll see photos of the royal family as children. The King's Bedroom once sheltered the Old Pretender during the Jacobite rebellions and also served as a dressing room for King George VI. In the Billiard Room you'll see rare 17th century tapestries while the spooky Crypt is adorned with numerous game trophies.

Centuries of history at Glamis Castle have left their mark. This is not only in the finery of antiques and portraits but also in a wealth of legend and myth that surrounds the place. The Chapel is said to be haunted by Lady Glamis, Janet Douglas who was burnt as witch in 1537 for supposedly plotting to murder James V. Known as the Grey Lady, a seat in the chapel is reserved solely for her use. The grounds surrounding Glamis Castle are also reputed to be haunted by two lost souls. One mysterious White Lady whose origins are unknown and the Black Page Boy, said to have been a badly mistreated member of the Glamis household. Far more gory, is the legend of the Glamis Monster. Badly deformed, he was locked up at birth and said to be dead but on moonless nights was allowed out for exercise. Glamis Castle has not only seen monsters, spooks and spirits but the Devil himself is said to have come knocking on the door. He turned up on the stroke of midnight after a guest had drunkenly complained that he would play cards with the devil himself if everyone else in Glamis Castle was too pious to play cards on the Sabbath. A maid servant who spied on the game is said to have been blinded and subsequent noises from its walls resulted in the rooms being sealed off.

Glamis Castle is surrounded by some 14,000 acres of grounds which are host to flora and fauna such as kestrels, kingfishers, otters, red squirrels, stoat, hare, azaleas, rhododendrons, snowdrop's and thistle. Visitors to Glamis Castle Grounds may choose between four walks, the Italian Garden Walk (25 mins) takes in the Italian formal gardens planted in 1910. The Glamis Castle Nature Trail Walk (25mins) takes in mature woodland with Douglas firs, copper beech, oak sweet chestnut and red squirrels waiting to be spotted. The Pinetum Walk (30 mins) boasts varieties of conifers as well as roe deer, tawny owls, the spotted woodpecker and good opportunities to see kingfishers near the bridge over the River Dean. The River Dean Walk (15 mins) will get you close to the highland cattle at Glamis Castle. The river itself is home to salmon, trout, otter, kingfisher and heron.

The best time to visit Glamis Castle is at the beginning of September when Glamis Castle hosts Scotland's Countryside Festival with events and displays such as falconry, gun dog trials, clay shooting, salmon and trout casting, Dog scurrys and archery. 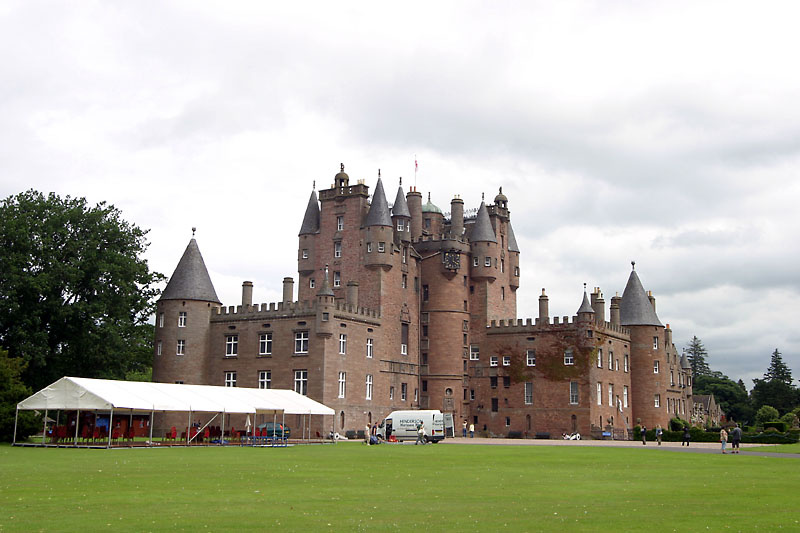 Killin is situated in a highly enviable position on the Falls of Dochart at the eastern end of Loch Tay. This area is a great destination for outdoor ....