Known to locals as simply "Kirrie", Kirriemuir is a delightful town composed of red brick buildings and winding streets. Situated on a hill six miles north west of Forfar, Kirriemuir is a great base for exploring the Angus Glens and is sometimes dubbed the 'Gateway to the Glens'.

Kirriemuir is best known as the birthplace of "Peter Pan", a heritage proudly commemorated with the Peter Pan fountain in the centre of Kirriemuir. It was here that J.M. Barrie, the son of a weaver grew up in a simple cottage. From as young as 7, Barrie used the washroom opposite the Kirriemuir house to put on plays and charged his friends coins and marbles for the privilege of watching them. This was the basis for Wendy's House in Peter Pan while Kirriemuir itself was thinly veiled as "Thrums". The cottage has been refurbished with period furniture and is now in the care of the National Trust.

Barrie is also responsible for another of Kirriemuir's main attractions. He donated the Camera Obscura to Kirriemuir in 1930. It is now housed on Kirriemuir Hill in the former cricket pavilion. One of three camera obscuras in Scotland, the circular disc displays the surrounding scenery for miles around providing close up views of Strathmore and the Angus Glens. On a clear day, you'll be able to see 71 miles to Ben Louis via the Kirriemuir Camera Obscura. Barrie chose the family grave in Kirriemuir cemetery over a final resting place at Westminster Abbey and sign posts will point you to where he lies.

Kirriemuir also draws a rather different kind of pilgrim who come to see where Bon Scott, lead singer of AC/DC lived before his emigration to Australia. Better known is Kirriemuir's association with Robert Falcon Scott and Edward Adrian Wilson. They trained for their mission to Antarctica in the nearby Glen Prosen. They are commemorated by a cairn at Dykehead where a hut they used once stood.

Tourists in Kirriemuir also enjoy visiting the Kirriemuir Aviation Museum which houses a private collection of World War II memorabilia. Alternatively, head to the Gateway to the Glens Museum which is housed in the former town hall on the High Street in Kirriemuir. The museum displays intricately carved Pictish stones, relics from Kirriemuir's weaving past and the history and geology and wildlife of the nearby Angus Glens. The Angus Glens lie to the north of Kirriemuir and provide beautiful hillwalking. 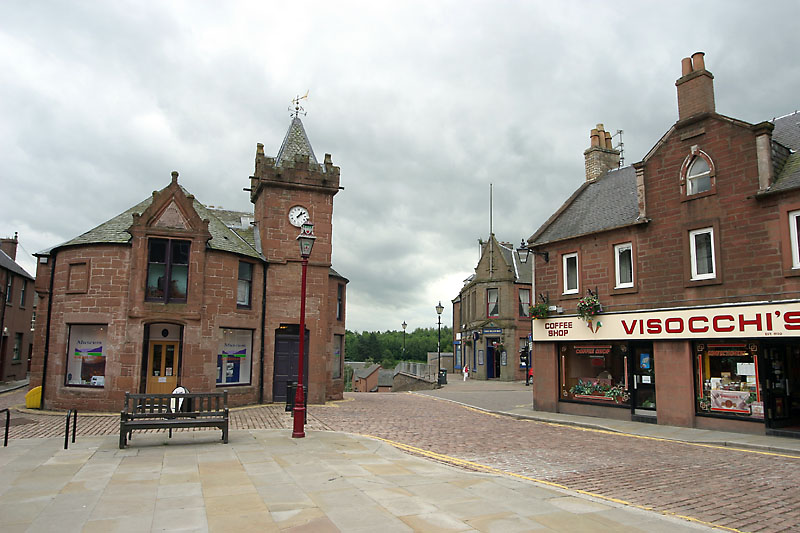