Old Aberdeen developed in three distinct periods. During the 12th and 13th centuries, the area around St Machar's Cathedral, now known as the Chanonry, was developed. In 1489, Old Aberdeen was granted Burgh of Barony status and the centre of the new town was marked by the Mercat Cross in the Market Square. Just five years later, King's College was founded and the academic area of Old Aberdeen was subsequently constructed.

One of the oldest structures in Old Aberdeen is Brig O' Balgownie or the bridge over the River Don. An ancient monument, the bridge was constructed in the 13th century and according to legend the work was finished by Robert the Bruce. However, the structure which you'll see on your visit is largely the result of reconstruction in the mid 19th century. Heading up Don Street from the bridge brings you to Seaton Park, a beautiful green space which once surrounded Seaton House. Amongst the interesting features of the park here is Tillydrone Motte. Formerly thought to be the remains of a 12th century castle, archaeological excavation has revealed that this mound was created in the 2nd century. It has yet to be determined whether the structure was used as a defence or for burial. A short distance to the west is the late 16th century Benholm's Lodge. A turreted town house, it was moved (stone by stone) to its present position in 1965 when Netherkirk Gate was developed.

At the edge of Seaton's Park lies St Machar's Cathedral. According to legend, St Machar had a vision which revealed that he was to build a church at the point where a river bends in the shape of a bishop's staff. Unfortunately for the legend, St Machar's Church was founded in about 580AD - a time when bishop's staffs were straight and not curved. The church which you'll see here dates to the 14th century and is worth seeing for the magnificent 16th century heraldic ceiling. Nearby is the Cruickshank Botanical Garden, established to enhance the study of botany in 1898. It now delights with over 2,500 varieties of plants.

Continuing in the heart of Old Aberdeen along the High Street, you'll see the Old Town House facing the market square. Once the administrative centre of Old Aberdeen where court was held, the Old Town House has also served as a church mission, Masonic Lodge, jail and a library. It now serves as the Old Aberdeen Visitor Information Centre and provides free leaflets which will direct you on a self-guided historical and architectural tour of this hidden gem in the north east of Scotland.

One of the most interesting features you will notice as you walk around these cobbled streets, is an unusual yet charming mixture of architecture. No. 81 High Street, for example, is a fine private residence surrounded by a walled garden which dates to 1780. Just round the corner is Wrights' and Coopers' Place named after the metal-workers and barrel-makers who plied their trade in the city of Aberdeen. In this wide lane, you'll see their simple single-storey cottages which provide a stark contrast to the grand Georgian town houses nearby. At the end of this lane, is the MacRobert Memorial Garden. Surrounded by granite walls, this remembrance garden provides a haven of tranquillity for both students and visitors to the University of Aberdeen campus.

Continue your tour of Old Aberdeen by turning right into Dunbar Street. Passing through the archways, you'll see Elphinstone Hall on your right which is named after one of Old Aberdeen's most notable figures, Bishop Elphinstone. Appointed Bishop of Aberdeen in 1483, he was largely responsible for Old Aberdeen being granted its Burgh of Barony which effectively made it an independent town.

The next gem on your of Old Aberdeen is the King's College Quadrangle which along with the chapel are the only original survivors of the University of Aberdeen. King's College Chapel is literally unmissable. This historic building was the centre of life in the early days of the University of Aberdeen and its structure takes up an entire side of the quadrangle. Passing through the ornate oak screen doorway will bring you into the chapel choir. Here you'll see 52 intricately carved stalls, unique survivors of their kind in Scotland which date to the early 16th century. The black marble slab which lies in front of the pulpit is Bishop Elphinstone's tomb.

Back on Old Aberdeen's High Street, you'll see an imposing gateway known as the Powis Gates. Topped by minaret towers, the gateway was erected by Hugh Fraser of Powis in 1834. An impressive statement of power, it bears a shield which remembers the freed slaves who once worked on the family's plantations in Jamaica.

Curious Facts or Total Fiction? Lord Byron studied at the University of Aberdeen and remembered the Brig O' Balgownie in his poem Don Juan. 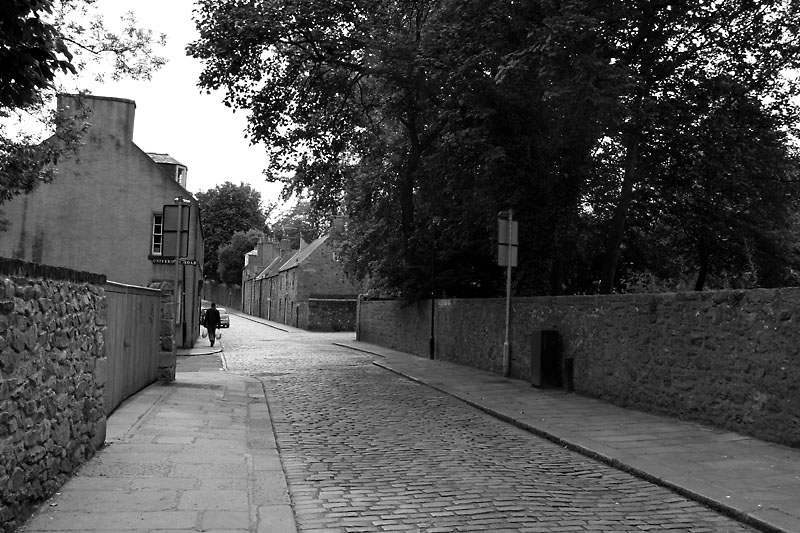