Lying ten miles to the east of Dufftown and 33 miles Northwest of Aberdeen, Huntly is an old burgh situated in an area known as Speyside. Although the area attracts tourists on the Whisky Trail, there are no distilleries to be found in Huntly itself. Nevertheless, Huntly is well connected by rail and road and provides a great base for exploring the attractions in the surrounding area.

Huntly is an old burgh which was granted its charter back in 1488. The area itself has a much older history and is littered with Pictish standing stones and Celtic sites. The Standing Stones of Strathbogie lie in the centre of Huntly, in the town square. Once part of a stone circle, they now lie beneath a statue to the 4th Duke of Richmond and are affectionately known in Huntly as the "Stannin Steens of Strahbogie". Another attraction in Huntly's town square is the Brander Museum which is dedicated to the history of Huntly and the surrounding area. It also tells the tale of Huntly's most famous literary artist, George MacDonald. A direct descendant of the MacDonald's massacred at Glen Coe, MacDonald wrote fairy tales and fantasy novels which inspired the likes of C.S.Lewis, J.R.Tolkien and W.H.Auden. Other exhibits at the Brander Museum in Huntly include arms from 19th century Sudan as well as relics retrieved from Huntly Castle.

The most popular attraction in Huntly are the ruins of Huntly Castle, once the luxurious residence of the Earls of Huntly. Situated at the the northern edge of Huntly on the banks of the River Deveron, Huntly Castle was once home to one of the most important Catholic families in Scotland. Indeed they even gave Huntly its name for the area and its castle were formerly known as Strathbogie. Over the years, Huntly Castle has sheltered Robert the Bruce, Mary of Guise and changed hands in the turning tides of the Covenanting wars. The castle walls are still clearly decorated with ornate heraldic sculptures which now bear forlorn testament to the luxurious day-to-day life that was once the norm here.

A neat little town, Huntly is an interesting place to stroll around and those interested in history and architecture can pick up a Town Trail leaflet at the Huntly Information Centre in the square. Despite its ancient history, most of the grey stone buildings which you'll see here date predominantly to the 18th and 19th centuries. It was during this time that Huntly was a central player in Scotland's thriving linen industry, producing over the third of the country's output at one time. Those days are long gone and today Huntly is best known for the production of fine shortbread by Dean's of Huntly.

Sport enthusiasts in Huntly can play a round of golf at the 18 hole Huntly Golf Club or go roller skiing at the Huntly Nordic & Outdoor Centre. Nearby the Clashindarroch Forest is lined with forest trails perfect for mountain biking, walking or cross country skiing in the snow. A short distance from Huntly, Artloch & Mossat Fisheries offer trout fly-fishing. Alternatively, enthusiasts may want to head to River Deveron, one of the top 5 rivers in Britain for salmon. To the south of Huntly, Corrylair Riding Centre offers horse riding treks for all levels.

Curious Facts or Total Fiction
- Alexander, 4th Duke of Gordon raised a regiment from his Huntly estate in 1793. With their own tartan made locally by a Huntly weaver, the regiment became known as the "Gordon Highlanders". It was amalgamated with the Queen's Own Highlanders in 1995 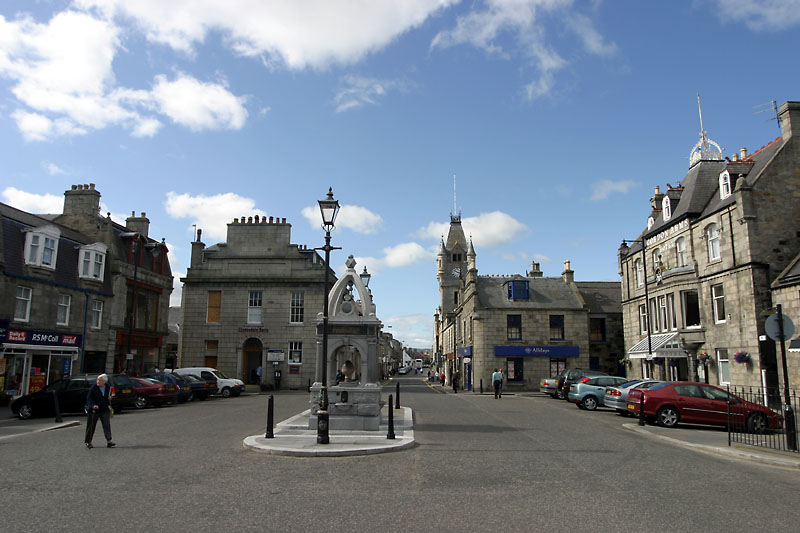