Lying midway between Inverness and Aberdeen and some four miles from the Moray Firth Coast, Fochabers is a charming wee village well-situated for walking and touring attractions in the north east of Scotland.

Charming though Fochabers may be the village's history is not so pretty. The original Fochabers was a somewhat untidy affair of dilapidated old cottages in the Duke of Gordon's parkland. His solution was to move Fochabers to its present location and many of his previous tenants were not invited. Nevertheless, the new Fochabers was much more refined. Built in the late 18th century by the architect John Baxter to a rectangular street plan, Fochabers was now centred on a large spacious square with a large fountain in the middle. On the south side of Fochabers Square, you will see the elegant Bellie Church with its porticoed fa?ade and clock tower. Other interesting buildings in Fochabers include Gordon Chapel which was dedicated in 1834 and the former Pringle Church on High Street. This is now the home of the Fochabers Folk Museum which details the history of Fochabers and Fochaberians. Also on Fochabers High Street is the imposing structure of Milne's High School. It was designed by Thomas MacKenzie and built with money gifted from a native of Fochabers who emigrated and found his fortune in New Orleans.

Fochabers Square is also a starting point for numerous sign-posted woodland and riverside walks which vary from short ambles to more energetic hill climbs in the forest. Most of the woods around Fochabers are owned by the Forestry Commission. As you head away from Fochabers, you can expect to see wildlife such as badgers, deer, woodpeckers and osprey. In addition to the circular walks returning to Fochabers, you can also join the Speyside Way, a long-distance route between Buckie and Aviemore which takes in the best of the Spey Valley. If you prefer angling, the Fochabers Angling Association issues visitor's tickets.

About one mile to the west of Fochabers is Baxter's Highland Village. Now a tourist attraction in its own right, the business was started in 1868 when an employee of the Duke of Gordon opened a small grocer's in Fochabers. George Baxter's wife also pitched in making preserves and jams. Their fame spread out of Fochabers and the firm is now one of the best-known food firms not only in Fochabers but the whole of Scotland.

Fochabers is also known for another good ol' Scottish tradition, fiddle playing. William Marshall, one of Scotland's finest fiddle composers was born in Fochabers. Today, Fochabers is home to another well-known Scottish fiddler, James Alexander. He leads a group of some 40 fiddlers known as the Fochabers Fiddlers. You can listen to their music at the Speyfest, an annual festival of traditional and contemporary Celtic music held in Fochabers at the beginning of August. 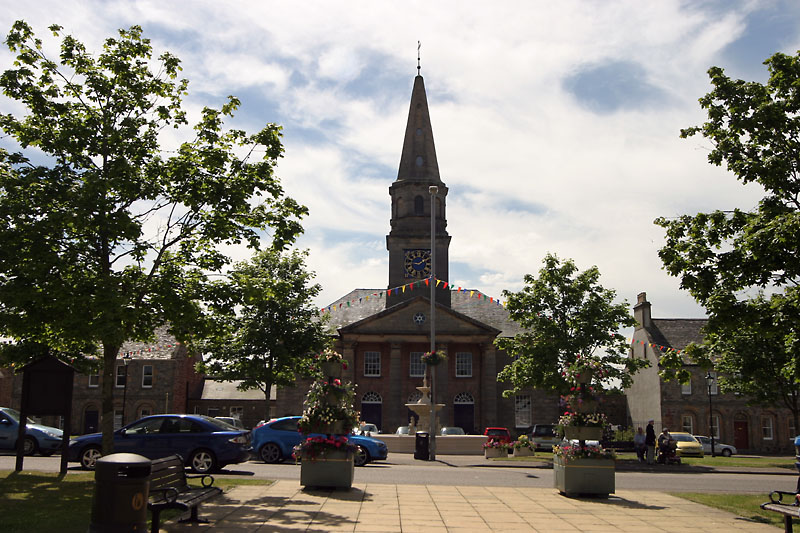