Historic sites, visitor attractions and a picturesque setting surrounded by beautiful countryside all contribute to making Llangollen an ideal tourist destination at any time of the year. One of the most popular tourist towns in Wales, Llangollen is most famous for the annual Llangollen International Musical Eisteddfod (folk music festival). A quintessentially Welsh town, Llangollen is well-situated for walking and a range of Adventure Sports can also be enjoyed in the area.

The focal point of Llangollen is Llangollen's bridge which is thought to be the first stone bridge built over the River Dee. Constructed in 1345, the bridge links the two sections of the town, divided naturally by the fast-flowing waters of the River Dee. From here, you will great views of sights such as the Llangollen Steam Railway and Castell Dinas Bran, an ancient hilltop fort with remains of a thick-walled castle built in the Middle Ages.

An impressive sight, Llangollen Steam Railway was resurrected in 1975 and now runs for 8 scenic miles to Carrog. Boarding at the age-old station, you'll hop aboard ancient carriages which still bear the liveries of their former owners. For an alternative scenic tour, visitors to Llangollen can also take a ride upon a horse-drawn barge. Regular trips leave from Llangollen Canal and take visitors up and down the Vale of Llangollen. Now used for pleasure boating, Llangollen Canal was originally constructed to carry slate from the Horseshoe Pass quarries " its success was one of Thomas Telford's greatest achievements. Telford designed an elegant crescent-shaped weir, known as Horseshoe Falls, to provide the canal with water. Through an unprecedented masterpiece of canal engineering in Britain, Telford built the Pontcysyllte Aqueduct which took the canal over the Dee. The highest canal aqueduct ever built (38m) it was also the longest ever to be built in Britain. Now being considered as for World Heritage Status, the structure can be seen three and half miles east of Llangollen.

Whether or not you like boating, Llangollen Canal is an attraction in itself. You can take a gentle stroll here along the promenade but if you?ve got the energy for the 45 minute walk from Llangollen Canal Wharf to Dinas Bran, you'll be well-rewarded with the view of the panorama. Walkers can also take the Llangollen History Trail (6 miles) around town or the longer Dee Valley Way (15 miles) which runs by the River Dee between Llangollen and Corwen.

Llangollen has been popular with tourists ever since the Victorians. Forced to abandon the traditional Grand Tour of Europe due to troubled times overseas, the Victorians began traveling in the UK. George Borrow, recognized as the first travel log writer, celebrated Llangollen in his book, Wild Wales while John Ruskin described the town as "entirely lovely in its wilderness". Turner also admired Llangollen and spent time here while working on his painting of the nearby Valle Crucis Abbey, the well-preserved remains of a former Cistercian monastery. Established in the 13th century, Valle Crucis was the first Gothic abbey to be constructed in Britain. Although it was destroyed during the Dissolution of the Monasteries and used as a farm for years, the ruins are substantial and worth visiting. Adjacent to the ruins is a popular camping ground.

Valle Crucis or "vale of the cross" owes its name to 8ft Eliseg's Pillar situated a short distance out of Llangollen on the A542. An ancient monument, it was erected in the 9th century in memory of Eliseg, Prince of Powys. Wrecked during the Civil War, the monument was re-erected in the 18th century. Visitors to Llangollen interested in history may also wish to drop into the Llangollen Museum or the Llangollen Motor Museum which displays classic cars from the 1920's.

Visitors to Llangollen in the 19th century were also drawn here by the infamous Ladies of Llangollen. They hosted high society at their house Plas Newyd enjoying the company of the likes of Sir Walter Scott, etc. The two ladies, known for their eccentricity were lesbians who enjoyed a quiet lifestyle in their country cottage, working in their garden and collecting. The house is now open to visitors and is under the care of the National Trust.

If you don't mind crowds, the best time to visit Llangollen is in July during the annual International Musical Eisteddfod which has been held in Llangollen annually for over 60 years. This folk music and dance event draws some 12,000 performers and thousands of spectators every year with shows held in the purpose-built Royal International Pavilion. Also held in July, the Llangollen Fringe Festival displays various theatre, poetry and music performances. 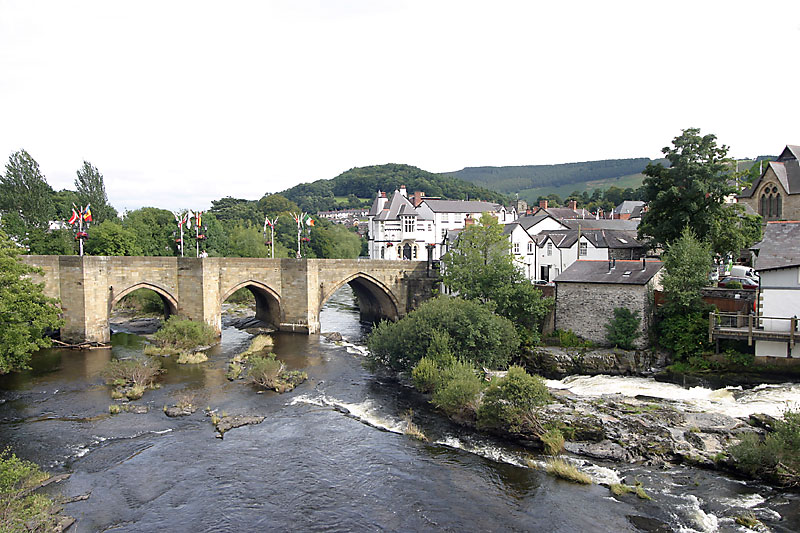