Situated some 5 miles north of Elgin on the Moray Firth Coast, Lossiemouth is an ancient fishing settlement and popular tourist resort. A picturesque destination for walking, angling or golf, Lossiemouth is also a great base for touring the attractions in the northeast of Scotland.

The area which is now known as Lossiemouth has been inhabited for over 1000 years. Lossiemouth itself is a new entity which united the once separate villages of Seatown, Branderburgh, Stotfield and Old Lossie. Seatown is the oldest part of Lossiemouth and 51 of its 52 cottages are protected heritage buildings. The original Lossiemouth surrounded the port and was planned in the 18th century and built to a grid system. This new settlement at Lossiemouth was to replace the old port at Spynie which had been rendered useless by the silting up of the river. The Branderburgh area of Lossiemouth developed following the construction of its harbour and it developed along with the railway in the 19th century. To find out more about the history and heritage of Lossiemouth head to the Lossiemouth Fisheries and Community Museum. You'll learn Lossiemouth's 19th century tragedy which wiped out all but two of the adult male population. On your visit, you will also see a replica of the study of James Ramsay MacDonald (1866-1937), the first Labour Prime Minister of Great Britain who was born in Lossiemouth.

For many, the main attraction in Lossiemouth are the gorgeous expanses of white sand which provide great walking from Lossiemouth to Hopeman or even as far as Spey Bay. Keep an eye on the Moray Coast as you go " you never know when you may spot the resident population of bottle-nosed dolphins here. Alternatively, Lossiemouth also boasts one of the best links golf courses in the UK which was designed by Old Tim Morris.

Lossiemouth also draws aviation enthusiasts. Lossiemouth is home to the main RAF base in the UK for Tornado GR4s. During office hours you can expect to see tornadoes and a range of jets going through their exercises.

Visitors to Lossiemouth keen on the sea can opt for an angling trip, dolphin spotting cruise or sailing. Keen independent sailors can also contact the Lossiemouth Cruising Club who are always looking for extra hands. 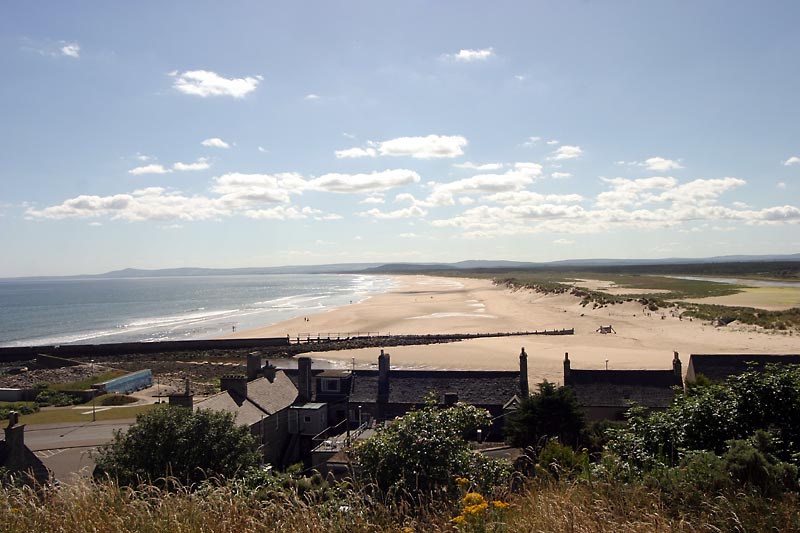