Bank is not merely the financial sector but also offers some of the finest architecture in the city. Unfortunately, what we see today are the remains of the Fire of London which burnt down about 4/5ths of the buildings in the area. 3 buildings of particular note are built in the Neoclassical style in Portland stone, the Bank of England, the Royal Exchange and Mansion House. You can visit the Bank of England and walk above Britain's gold reserves which are protected in its vaults. The building has stood here since 1734 although the company was originally established in 1694 by William III who sought money to fund the war against France. Known to locals as the 'Grand Old Lady of Threadneedle Street' there is little of the original left. In fact, it is only the outer wall which spans an impressive 3 and a half acres which has outlived its maker, Sir John Soane. If you'd like to see the original you can visit the museum on Bartholomew Lane (Monday to Friday 10am to 5pm, entry free), which houses a reconstruction of the original Soane's Bank Stock Office including its skylight. Mansion House is the 2nd Neoclassical building of note but being the official residence of the Lord Mayor it is unfortunately not open to the public.

The Royal Exchange dominates the view on emerging from Bank station. The historic building was originally constructed in 1566 thanks to a Thomas Gresham a well-travelled merchant and a knight who offered to build the city a bourse at his own expense if the land was provided. The building was adorned with the Gresham family crest of a grasshopper in return for their generosity. The 1666 Fire of London destroyed the building but it was rebuilt by 1669 with the addition of large chiming clock to mark the hours of trading. By the late 18th century shops began to move westwards and businesses such as the Royal Exchange Assurance came in to fill the vacated space. Ironically, the building was once again destroyed by fire when a blaze broke out in the Lloyd's rooms during a cold spell that had frozen the water in the firemen's pumps. 1844 saw Queen Victoria reopening the building with a lavish ceremony to mark the building's importance to the city. Trading flourished and about 40 years later 24 art panels depicting the history of the city were installed around the ambulatory. Although trading virtually ceased during WWII the building survived and by 1953 the Courtyard became the stage of a theatre company which would later turn into the celebrated Mermaid Theatre. In 1991, the Royal Exchange underwent further restoration and refurbishment adding an additional floor and 20 new Corinthian capitals. The Royal Exchange has reinvented itself over the years and the millennium brought new changes. Today the courtyard houses some exclusive shops such as Prada, Paul Smith and Tod's. The courtyard and 2 mezzanines form the Royal Exchange Cafe and Bar and is a favourite with local business people for lunch, dinner and the comsumption of copious amounts of champagne. Feel free to have a wander around the building, windowshop or simply have a coffee. Incidentally, the cocktails here are fantastic but I'd really give the coffee a miss. The 12.5% service charge on the bill does not go to the waiter and is a company charge - you can always ask for it to be removed and tip the waiter in cash, it will be much appreciated!

Other architectural sites which will interest you in the area include the Lloyd's building, an impressive creation of blue steel pipes and glass, created by Richard Rogers 1984. The more recent Swiss Re building was built on the Old Baltic Exchange site. The structure stands out from it surrounds and you'll immediately notice it with its unusual shape designed by Norman Foster, which has lent itself to be called an upside down icecream cone, a gherkin and even less reverentially a ribbed dildo.Although you can take the tube from Bank to Monument you're better off walking both 'cos you'll miss the sights and 'cos Bank station is a painful maze of tunnels which is more likely to cost you time and energy. Monument is a Doric column designed by the famous British architect Wren in order to commemorate the devastation of the 1666 Great Fire of London. At 202, it is the tallest freestanding stone structure in the world. At its top, flames glint in the sunlight and mark the very place where the fire started to the east at a bakery if the pillar were laid flat along the ground. You can climb the 311 steps to the top but your efforts will be dwarfed by the height of the buildings which have engulfed the monument. 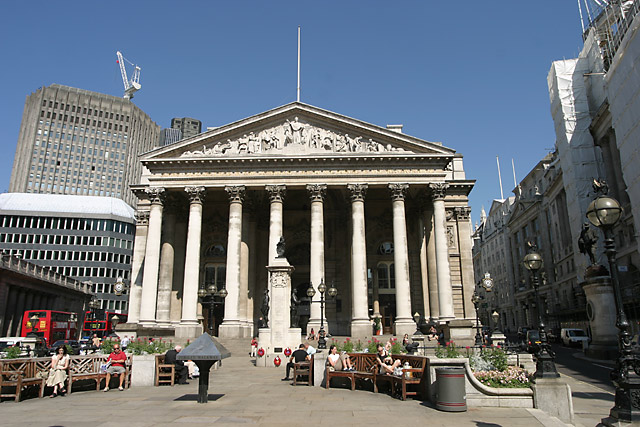