Hyde Park is the largest inner city park in London. Like St James's and Green Park, Hyde Park remains the property of the Crown although it is now supported by public funding. The Park was first opened to the public by James I although it had actually been Crown property since it was taken over by Henry VIII with the Dissolution of the Monasteries in 1536 to serve as his private hunting ground.

On a sunny day as children play, people sunbathe, play sports, rollerblade and stroll through the park, it is hard to picture the bygone years in the park. In the 17th century, Hyde Park began to be the place to see and be seen. Ladies and gentlemen showed off the latest fashions on horseback and in carriages leading some to complain, "most shameful powder'd-hair men, and painted and spotted women". The desire for attention did not always pay off in the way intended. Cromwell ended up getting dragged behind his horses and shot by his own pistol which went off in his pocket. Pepys similarly managed to do himself up until by his own claim he looked "very pretty" until his horse ran away with him.

The Serpentine, was created at the whim of George II's wife, Caroline. With the help of Sir Rober Walpole she ordered the River Westbourne's damming so as to create a boating and swimming lake in 1730. As well as a leisure area, the Serpentine also became a favourite with would be suicides and it was here that Percy Bysshe Shelley's pregnant wife, Harriet drowned herself in 1816. This seemingly tranquile leisure ground has seen plenty of drama over the centuries. In the 18th century, Hyde Park saw numerous hangings, duels and highway robbery as the rich made their way through the traffic between the new Kensington Palace and the City.Hyde Park has also been the site of fairs, concerts, and the 1851 Great Exhibition.Guide to the ParkIn 1828 Marble Arch intended as a triumphal entry to Buckingham Palace was erected but by 1851, John Nashs' work was moved to the west end of Oxford Street as its structure proved too narrow for stately coaches. It now stands almost in place of the Tyburn gallows, a site of great public entertainment where hangings were carried out until 1783. While you're here check out the nearby Speaker's Corner. Every Sunday, in a celebration of free speech, orators deliver their spiel on salvation and politics while hecklers harangue them from the safety of the crowds.

The best place to enter the Park is at the southeast entrance at Hyde Park Corner. Here you'll see Wellington Arch amidst the traffic. The arch was originally the northern entrance gate into the grounds of Buckingham Palace. It was erected in 1828 to honour Wellington's success in the Napoleonic Wars. Nearby, Aspley House stands on a traffic island. Originally, as the grand residence of the Duke of Wellington, Aspley House was surrounded by parkland. It was remodeled by Benjamin Wyatt in 1829 and started to be filled with collector's pieces which were really trophies from successful battles. The museum holds some famous pieces such as the gigantic nude statue of Napoleon by Antonio Canova. In the Waterloo Gallery on the first floor you'll find works by Goya, Velazques, Rubens, Murillo, van Dyck and de Hooch. The gates which stand behind Aspley House were erected in commemoration of Queen Elizabeth, the Queen Mother.

You'll know George Gilbert Scott's, Albert Memorial when you see it glittering in the sunlight. He sits beneath an ornate, gilded spire under the protection of a marble canopy amid almost 200 sculpted figures. The memorial was built under the direction of Queen Victoria 15 years after she lost her beloved. The monument lies close to the site of the Great Exhibition and what you see the progressive statesman reading is really the catalogue of the exhibition. Queen Victoria was not appeased with this tribute and also had the 1871 Francis Fowke building called the Royal Albert Hall. This Gothic memorial which was originally intended as the Hall of Arts and Science is reminiscent of a Roman amphitheatre and is now known for its annual hosting of the "Proms". 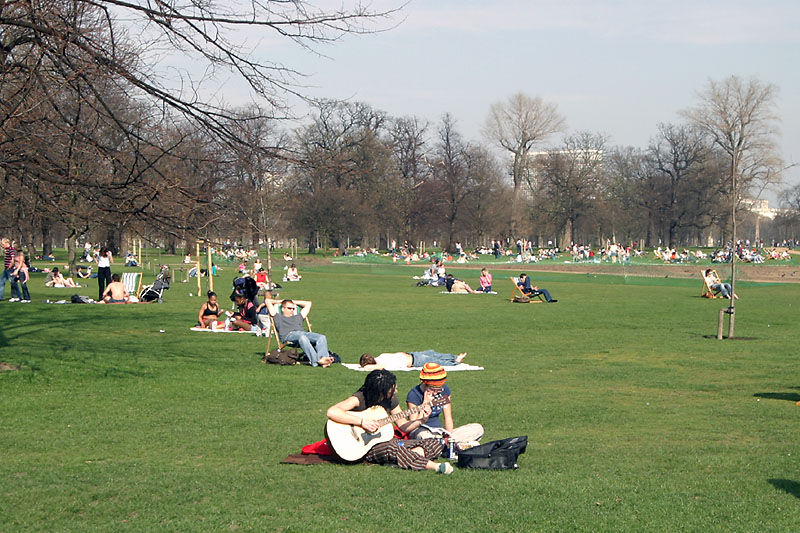 Trafalgar Square was named after the victorious naval Battle of Trafalgar in 1805. Popular with locals and tourist alike the square becomes a arena us ....