"It is the fashion to run down George IV, but what myriads of Londoners ought to thank him for, inventing Brighton."
William Thackeray

Lying on the southern coast of beautiful Sussex, the two boroughs of Brighton and Hove were given city status in 2000. Brighton is the larger and has a reputation for its liveliness, originality, and nightlife. It also boasts the largest gay population in Europe. Hove its quiet, refined neighbour is often referred to as Hove Actually due to the frequency of its residents distinguishing themselves from their wilder counterparts.

Brighton has been Britain's no.1 seaside destination since the middle of the 18th century when a Dr Richard Russell proclaimed the benefits of bathing and drinking sea water. Ever since, the sick, the elderly and the adventurous have flocked to this energising sea-side resort. In the 1780s, the town's popularity was forever established when the young Prince Regent (better known as King George IV) came here in search of cure for his gout. He built the grandiose landmark, the Royal Pavillion in a lavish, hedonistic manner further setting the tone the town would later become known for.

The town thrives with things to do and caters for all ages and interests. The seafront alone is 11km long and jam-packed with both free and paid activities. For the kids there's the beach and sand, carousel rides and amusement arcades while adults tend to go for bungy jumping and kayaking or simply head for one of the many trendy, specialist shops, galleries or restaurants. When the sun goes down and all the kiddies are safely asleep, Brighton pumps with a vibrant nightlife and a flourishing gay scene.

As long as you can stand hordes of like-minded tourists (& tonnes of English language learners), the best time to come here is between May & September when it hardly seems as though one festival has ended before another begins. The Brighton Festival (& its Fringe Festival) runs in May and is currently the best arts festival in England. July sees the Party in the Park whereas August is Gay Pride time with all its wonderful wackiness between Madeira Drive and Preston Park.

Things to See and Do

The Brighton Pier/The Palace Pier
Since May 1899, when the Brighton Pier first opened with the innovative use of 3,000 electric bulbs, the attraction has been a huge hit. Crowds willingly paid admission to see peep-shows, jugglers, illusionists or to buy souvenirs of their trip from one of the many side-stalls. Over a 100 years later, some 3 and a half million people visit the 1,722ft long pier every year. The attractions have changed with the times but remain as popular as ever. There's something for every tourist with the popular funfair, live entertainers, arcade games, sidestalls, traditional fresh fish & chip restaurant, a beer garden and a sports bar. Amidst all the activity you should still be able to spot some historic remnants of the past such as the original filigree ironwork arches, original kiosks and a signal cannon from the Old Chain Pier which served the town before its heyday.

The Royal Pavilion
The creation of this Mogul-style Palace in Brighton in the 18th century has everything to do with a young Prince. At the tender age of 17, Prince George of Wales had already earned himself a reputation for rakishness and extravagance. Despite the King's disapproval, the young Prince fell in love with Brighton when he first went to party there with his similarly dissolute uncle, the Duke of Cumberland. Aged 23, he unlawfully married Maria Fitzherbert. Now all he needed was a palace to party in.

The final result would take 35 years and "500,00 to create. He began by engaging Henry Holland to expand the premises of the farmhouse he had purchased. Holland produced a circular saloon, a further wing built in neoclassical style and designed the iron balconies and bow windows which would go on to become classical features of the Regency style. Next, came a Chinese interior and a huge, Indian, domed stable block, work of William Porden. Still, the Marine Pavilion, as it was now known, still needed further embellishment in the future king's eyes.

By 1815, it was time to engage, his favourite architect. John Nash was responsible for the extension and transformation of the Pavilion in the Indian style the Prince requested. The result was a gracefully, exotic and sensual exterior fashioned out of stucco and Bath stone. So pleased was ol' George, he is said to have cried for joy when he saw the final results. He put the final creation to good use throwing lavish parties with guests such as Lord Byron who would make merry amongst performers such as Rossini.

Despite all a King's duties, George still managed to take time off to visit his favourite creation. After his death, his brother William IV succeeded him to the throne and continued to use the royal residence. However, conservative Queen Victoria found the lavish building somewhat overwhelming for her taste. She had the palace stripped completely, a feat which required no less than 143 wagons. She then proceeded to sell the palace to the town in 1850. Fortunately over the years most of the items have been returned by various Royals and the Royal Pavilion has been carefully restored to its former opulence and glory.

The West Pier
The West Pier which dates from 1866 has had a somewhat more unfortunate history than its thriving counterpart. Despite the fact that it's a Grade 1 listed building, the Pier has patiently been awaiting restoration since 1975. Over the course of 30 years wallowing in limbo, the concert hall fell into the sea and firefighters were unable to quell the flames of a suspected arson attack due the weakening of the pier's structure after years of storms. The West Pier Trust, lost all battles against local residents who claimed reconstruction would block their sea-view and the Brighton Pier who claimed subsidised funding would be unfair. Finally, in 2004, the Trust gave up hopes of reconstruction when both the English Heritage and the Heritage Lottery Fund rejected their plans. The Trust now hopes to rebuild the pier even if they are unable to reconstruct it along the same lines as the original.

Prehistoric Brighton
Manor Road bisects Whitehawk Camp an early Neolithic enclosure which dates to c.3500BC If you head to the south of Manor Road, you'll be able to see significant remains of 4 concentric circles of ditches and causewayed mounds.

Another remain is The Goldstone which lies north of the retail park on Old Shoreham Road. It is believed to have been used for ceremonial purposes c.2000 BC. Next, head to Hove Park where there's a resurrected, standing stone circle. The stones were buried by an irate farmer who'd had one too many uninvited guests visit the site and trample his crops.

Hove Museum & Art Gallery
The Hove Museum is housed in an Italianate, Victorian villa designed by Thomas Lainson in the 1870s for John Oliver Vallance. Collections include Decorative and Applied Art, Film, Costume and Textiles, Fine Art, Social History, a wonderful attic of Toys. While your here keep an eye out for the Hove Amber Cup, which dates from the Bronze Age. This wonderful artefact, no larger than a teacup was made from translucent, Red Baltic Amber. There are also other exhibits excavated from the Hollingbury Camp and other prehistoric sites in the area.
Address: 19, New Church Road, Hove, East Sussex, England, BN3 4AB.
Tel: (01273) 290200
Opening Hours: Tuesday-Saturday 10am-5pm, Sunday 2-5pm
Closed Monday, Good Friday, 24, 25, 26 December and 1 January
Accessibility: wheelchair/limited mobility including WC
Cost: ENTRANCE IS FREE 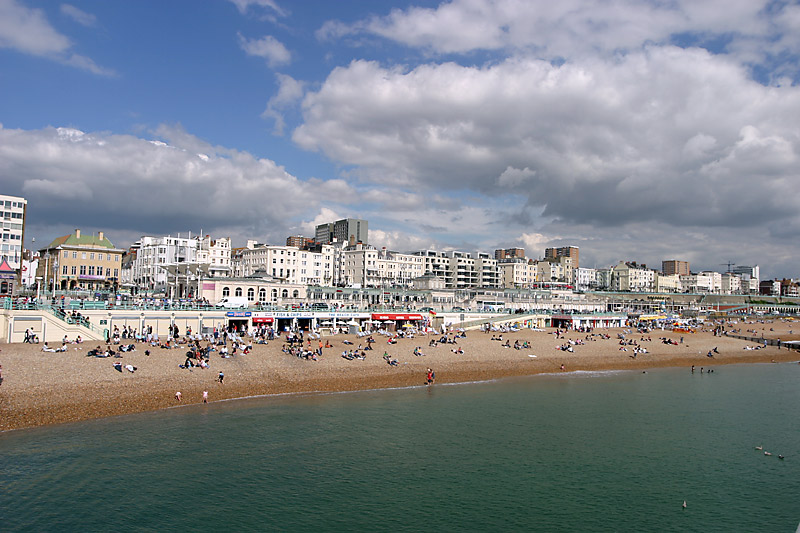