An old market town, Llanrwst is steeped in the history of Wales. Picturesquely situated at the edge of Snowdonia National Park, Llanrwst lies between the popular tourist destinations of Llandudno and Betwys y Coed. With its working-town feel, Llanrwst is an ideal base for touring attractions in North Wales.

The most prominent landmark in Llanrwst is Pont Fawr (Big Bridge) or the Llanrwst Bridge. With its elegant arches, the bridge is thought to have been designed by Inigo Jones and provided the main crossing over the Conwy until the construction of Telford's Conwy Bridge in 1825. Only wide enough for single traffic, the bridge will take you to Tu Hwnt I'r Bont. Once the courthouse, this picturesque 15th century ivy-clad cottage has been converted into a tearoom whose idyllic setting is a magnet for visitors.

Llanrwst owes it name to St Grwst (Restitutus), a 6th century missionary who preached in the area and to whom the 15th century Church of St Grwst is dedicated. Next to the church is Gwydir Chapel but the most famous religious building in Llanrwst is the Gwydir Uchaf Chapel which lies on the opposite side of the river. A private chapel of the Wynn family it stands in Gwydir Hill Park surrounded by fine forest walks. Built by Sir Richard Wynn in 1633, the chapel is noted for its painted ceiling. It also houses an empty stone coffin said to be that of Llewelyn the Great.

A key attraction for many visitors to Llanrwst is Gwydir Castle, the Wynn Family seat. One of the finest extant Tudor houses in Wales, Gwydir Castle is also thought to be one of the most haunted buildings in the country. Various historical accounts attest to this with numerous sightings including a woman, a dog and a monk. One particularly gory tale relates how Sir John Wynn seduced and then murdered a servant whose body he placed in a secret alcove which he then sealed. Inside Gwydir Castle, the pride and joy is the magnificent Dining Room whose restoration has a long tale of its own. Attributed to Inigo Jones, the carved oak panels, Baroque fireplace and gilded Spanish leather all contribute to the room's glory. Outside, the Dutch Garden with its abundant peacocks and fountain and ancient cedar trees is the main attraction.

Hill-farmers for many miles around have long regarded Llanrwst as their capital. A Tuesday street and livestock market still thrives here and there is a fair day on the Wednesday following the first Tuesday of each month. Llanrwst also boasts a phenomenal number of old coaching inns. Full of character, these include; Pen-y-Bryn, still an inn with its original ingle cook, the Eagles Hotel, the Hand, a former inn, now a butcher's shop and the former King's Head (now the British Legion Club), where John Richard, harpist to Queen Charlotte was born in 1711. 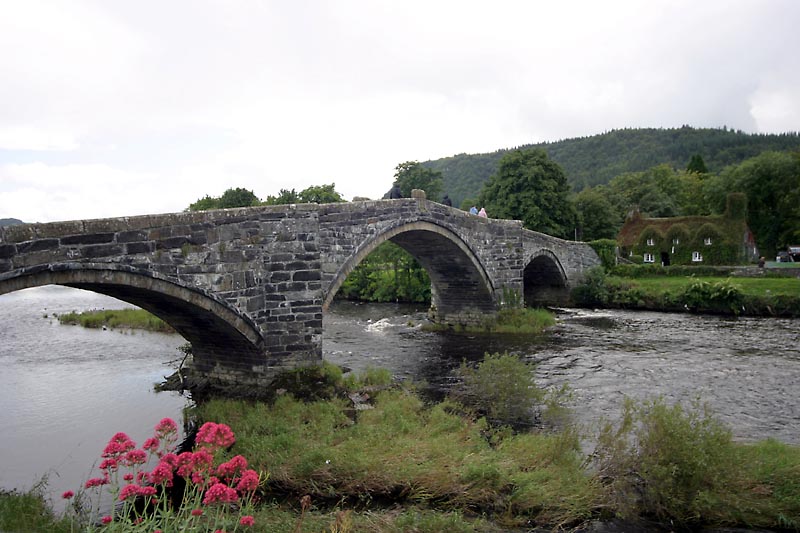