"Surfer's Paradise - that's what they call Newquay. ... "No matter what your level of expertise," added Sam, "there's a beach in Newquay with waves to suit. ..." "
Anna Charles, Ripples on the Water

An excellent destination for families, Newquay boasts plenty of kids' attractions to keep your little ones busy and entertained, (if you're actually able to get them out of the water!). As well as having a go at surfing and a range of water sports, you'll find enough children's attractions in the vicinity to keep your kids entertained should the weather actually take a turn for the worse.

Popular as it may be, Newquay is not as fresh as its name suggests. Although the town owes its name to the building of a new quay in 1439, there has been a settlement at Newquay ever since the Iron Age. First known as Towan Blistra, Newquay originally thrived as a fishing village but like other towns in Cornwall supplemented its income with steady smuggling and ship-wrecking. Pilchard fishing once largely provided for Newquay's needs and you'll still be able to see the gleaming cliff top Huer's Hut. This was once used to spot shoals of pilchard and a loud cry of "Heva!" from the hut would galvanise fishermen into casting their nets in the best places. In the 18th century, the pilchard industry dried out but was soon to be replaced by that great money-spinner, tourism. The Victorians were the first holiday makers to arrive. Borne upon a new railway system they came in search of that new trend, the seaside holiday. Newquay's attraction has never faded and what with its weather, beaches, history and proximity to London (2 and a half hours by train) it is highly unlikely that it ever will.

Newquay Beaches
A sun lover's paradise, the only problem Newquay provides is choosing which of its fine eleven beaches to go to. Fistral Beach is the most famous of Newquay's beaches. Excellent for surfing at low tide, Fistral boasts quick, hollow waves. Host of many an international and national surfing championship, Fistral Beach gets the best of the swell. Nearby on the headland is Towan Beach. Newquay's main beach, Towan Beach is easily accessible and provides kids' attractions in the form of a paddling pool and rock pools. The next beach lying to the west is known locally as Polly Joke. A pretty, sandy cove, Polly Joke can be quieter than its neighbours due to the 10 minute trek on an uneven footpath from West Pentire car park. Further west, you'll find Holywell Bay. Here you'll find beautiful sand dunes and on a good day you might be able to spot a dolphin or two. Nearby, there's more family entertainment at the Holywell Bay Fun Park (free entry) and Penhale Adventure Centre (coasteering, climbing, sailing, kitesurfing). There's not much organised entertainment at Crantock Beach but with its sheltering sand dunes makes a great place for a quiet, relaxing picnic.

Lying at the head of Newquay town centre, Newquay Bay boasts Tolcarne Beach and Lusty Glaze Cove. Popular with beginner surfers and belly boarders, Tolcarne Beach is close to Newquay Town Centre. Enclosed by cliffs with a lovely view from their top, access to Tolcarne Beach is via a flight of some 200 stairs. In Newquay Bay, you'll also find Lusty Glaze, a privately owned cove that is free to the general public. Lusty Glaze is sheltered by surrounding cliffs and home to the National Lifeguard Centre and the Lusty Glaze Adventure Centre. North of Lusty Glaze, Porth Beach is a popular family destination. Offering safe bathing, Porth Beach is fronted by an island where you'll be able to see a blow hole gushing at mid-tide. Porth's northerly neighbour is Watergate Bay, another surfers' mecca. Here the sand stretches for two miles but is reached only via steep paths leading down from the top of the cliff. This is no deterrent for adrenalin seekers who head here for the Extreme Academy which offers mountain boarding and wave and kite surfing. North of Watergate Bay is the little the hamlet of Mawgan Porth. A good place to go if you want to avoid the crowds, Mawgan Porth is a generally, uncrowded beach nestling between rugged cliffs. Next along is Bedruthan Beach. Accessible via a steep, cliff staircase, Bedruthan is no good for bathing. However, views from the cliff top are outstanding and should be high on the list of anyone making a visit to Newquay. This National Trust property also offers a network of footpaths and excellent if uneven walking.

Attractions around Newquay
Idyllically situated, Newquay lies on the Southwest Coast Path. Walkers will find a range of paths in the area such as the circular Crantock Estuary and Coast Walk (2 miles) or the cirular walk round Holywell and Kelsey Head (5 miles). Whether you're walking or driving on the B3276, the coastline between Newquay and Padstow is not to be missed. Here is beautiful Cornwall, a shaven landscape turned golden brown in the sun. If you're rushing (or not a keen walker) head to Bedruthan Steps and the area between Carnewas and Park Head for breathtaking views. You'll find more information at local tourist information centres.

Less than 5 miles from east Newquay, you'll find family attractions such as Dairyland, Lappa Valley Steam Railway and Trerice Gardens. Dairyland is a fun and educational park for kids with pets, play areas and an award-winning nature trail. The Lappa Valley Steam Railway offers you a traditional locomotive ride through a scenic woodland setting. Trerice is an Elizabethan mansion with beautiful gardens and an unusual lawn mower collection. North of Newquay is Crealy's Adventure Park, a great attraction for kids offering thrill rides and a range of activities. South of Newquay, you'll find Holywell Bay Fun Park. Offering free entry, you'll be able to try activities such as go-karting, maze solving and crazy golf. Nearby is Penhale Adventure Centre. Not for the frail at heart but for thrills and achievements in activities such as kitesurfing, parachuting and wake boarding. 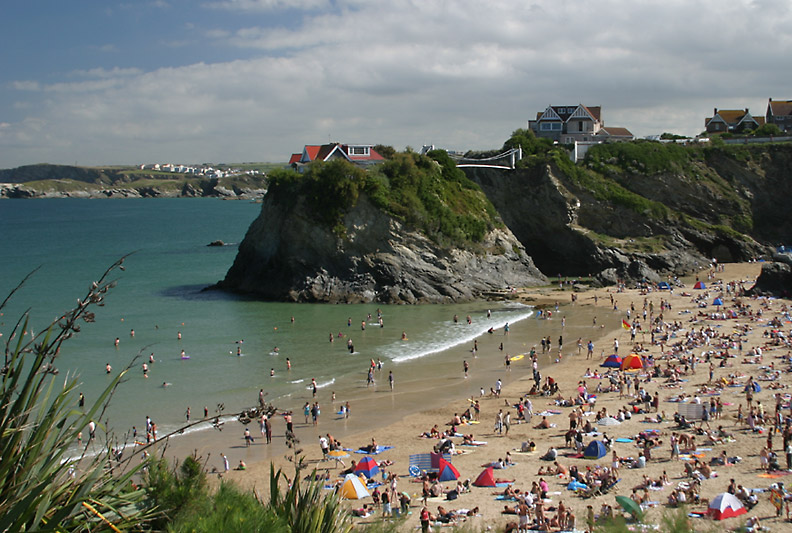 On a sunny day as children play, people sunbathe, play sports, rollerblade and stroll through the park, it is hard to picture the bygone years in the ....